PM Modi was in Lucknowto launch as many as 81 investment projects estimated to be worth over Rs 60,000 crore, according to officials. 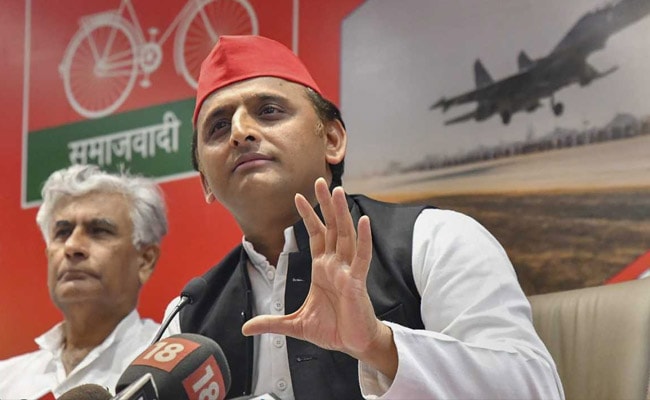 Taking a dig at Prime Minister Narendra Modi, the Samajwadi Party today claimed he was trying to save his lost popularity and credibility by laying foundations of various projects and building "castles of development in the air".

In a statement issued here, SP chief Akhilesh Yadav said, "Prime Minister was seen making a futile effort to sell developmental dreams during his two-day visit to Lucknow. He wants to save his lost popularity and credibility through laying foundations of various projects."

PM Modi was in Lucknow to launch as many as 81 investment projects estimated to be worth over Rs 60,000 crore, according to officials.

The prime minister is making numerous announcements, as they (BJP) have not been able to implement a single scheme, like the several schemes implemented during the tenure of Samajwadi Party, he said.

In the last six months there has been big talk about investment, but the truth is that in a state where there are law and order problems, how will the developmental schemes be successful, he added.

Their speeches attack the SP, since the SP is competent enough to take on the politics of hatred and division practised by the BJP, Mr Yadav added.

Meanwhile, the BJP also hit out at the SP claiming the Akhilesh Yadav led party had neither policy nor intention to do good work.

In a statement, state BJP chief Mahendra Nath Pandey said, "During the SP regime, the only investments made in the state were by criminals and in crime. The SP neither had a policy nor intention."

Taking a jibe at Yadav, he said, "While attempting to save the losing political ground and running from pillar to post in search of a coalition, the thought process of the prince of Saifai had become anti-developmental. Had the SP chief worked for the welfare of the people, they would not have been ousted."

Earlier in the day, hours ahead of the launch of 81 investment projects worth over Rs 60,000 crore for Uttar Pradesh by Prime Minister Narendra Modi, Samajwadi Party released a 40-second video clip ridiculing BJP's poll promises.

The SP took to Twitter to counter the BJP by reminding it of the 10 points in its 'Lok Kalyan Sankalp Patra' with background music of 'tumhara intezaar hai' (waiting for you)".

Starting with "economic help to farmers" to reforms in police system, ambulance services in 15 minutes and "police help in 15 minutes", the video sought to remind people of the ruling party's promises including "every one has the right to work" and "free laptops and internet".

Help to 'Shiksha mitras', 'women security', 'village-urban development' and 'cultural development' are still elusive and people are waiting, it claimed.

PM Modi's Uttar Pradesh tour today was his sixth visit to the state this month and second to Lucknow in as many days.

Describing Modi's event in Lucknow as an attempt to "mislead" the people by talking about development, the SP chief alleged the BJP 'excelled' in taking credit.

"BJP is an expert when it comes to quoting unfounded statistics on development. The PM praises the CM for having done nothing for the development of the state and the CM praises him in return, which is laughable," Yadav, a former chief minister, alleged.

He said though the prime minister "built castles of development in air", he "conveniently skipped" mentioning the 302 km Lucknow-Agra Expressway, the Gomti Riverfront, Janeshwar Misra Park and Lucknow Metro, which were flagship projects of the SP government.

Talking about investment and promising a better tomorrow is baseless when health services are in shambles and law and order situation in the state is at its worst, he said.

Commenting on the frequent visits of the prime minister to Uttar Pradesh, senior SP leader Ram Gopal Yadav said, "This is just the beginning. As elections approach, he will have to come here on a daily basis."

SP MLC Rajpal Kashyap alleged the Yogi government in UP and the Modi government at the Centre were engaged in propaganda before the 2019 Lok Sabha elections to drum up support for the BJP.

"The two governments have done nothing for the people and voters in UP are looking for a chance to bring about a change in governance," he claimed.