Before leaving for Lisbon, PM Narendra Modi had said during his meeting with Portuguese counterpart Antonio Costa, the two leaders will build on their recent discussions and review the progress of various joint initiatives and decisions. 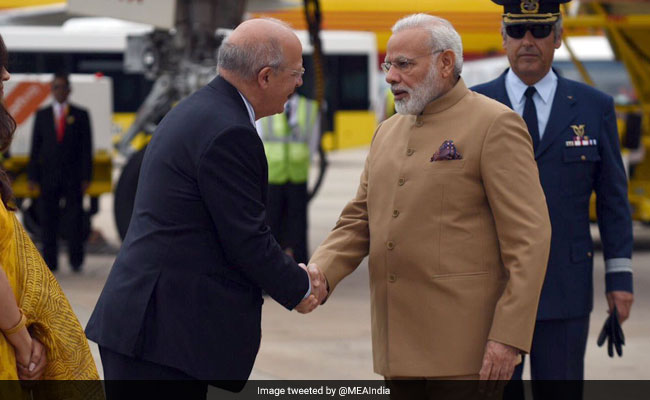 Lisbon: Prime Minister Narendra Modi today arrived in Portugal's capital Lisbon on the first leg of his three-nation tour during which he will hold talks with his Portuguese counterpart Antonio Costa to boost bilateral ties.

Before leaving for Lisbon, PM Modi had said during his meeting with Mr Costa, the two leaders will build on their recent discussions and review the progress of various joint initiatives and decisions.

Portuguese Prime Minister Costa tweeted this is an excellent opportunity to review the implementation of the accords agreed during his India visit and sign new agreements.

The highlight of PM Modi's four-day three-nation visit will be the US leg as PM Modi will be meeting President Donald Trump for the first time on June 26 in Washington.

Ahead of his US visit, PM Modi said he looked forward to the opportunity of having an in-depth exchange of views.

"My USA visit is aimed at deepening ties between our nations. Strong India-USA ties benefit our nations & the world," he had tweeted.

In a statement posted on Facebook, PM Modi said his two-day visit to Washington from June 25 was at the invitation of Mr Trump.

Apart from official meetings with Mr Trump and his cabinet colleagues, PM Modi will be meeting some prominent American CEOs.

After the US visit, PM Modi will travel to the Netherlands on June 27 where he will have a meeting with the Dutch Prime Minister Mark Rutte and call on King Willem-Alexander and meet Queen Maxima.

Promoted
Listen to the latest songs, only on JioSaavn.com
This year, the two countries are celebrating 70 years of the establishment of Indo-Dutch diplomatic relations.

"I look forward to meeting Prime Minister Rutte and reviewing our bilateral relations. I would be exchanging views with PM Rutte on important global issues including counterterrorism and climate change," PM Modi said ahead of the visit.