Sukhbir Badal said that Akali Dal will initiate the formation of a national pro-farmer front by coordinating with other like-minded regional parties to take this demand to its logical conclusion. 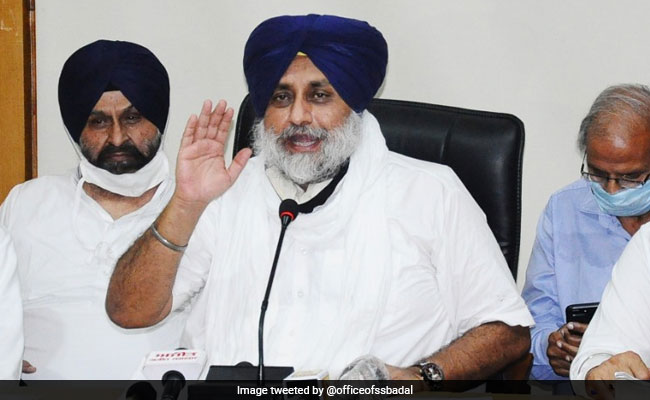 Shiromani Akali Dal (SAD) President Sukhbir Singh Badal on Friday urged Prime Minister Narendra Modi to address the grievances of the farming community by holding direct talks with farmers' organisations as well as all other stakeholders.

In a statement, the SAD president said the farmers' organisations have rightly rejected the secretary-level talks offered by the Agriculture Ministry as a bureaucrat cannot offer anything on the table. "The secretary had called the farm leaders only to explain the Centre's point of view," he said.

"The Prime Minister must understand that a lot of water has flown under the bridge. Farmers in Punjab and Haryana, besides other places, have taken to the path of agitation at grave personal risk to themselves during the pandemic because they are convinced the three recently-enacted agriculture laws will destroy their future generations," he further said.

Mr Badal added in such a situation, leaving aside any middlemen, the prime minister should intervene and hold direct talks with the farmers as well as other stakeholders, including all political parties. "This interaction should be followed up by scrapping the three agriculture laws and bringing in fresh legislation safeguarding the interests of farmers."

Sukhbir Singh Badal said as far as the SAD was concerned, it stood for a written assurance on the continuation of the central government's procurement of food grains as per the minimum support price (MSP), followed by legislation making this a statutory law. "We also stand for constitutional guarantees banning trade in food grains below the MSP," he added.

He also announced that the SAD would initiate the formation of a national pro-farmer front by coordinating with other like-minded regional parties to take this demand to its logical conclusion.

Mr Badal said he will personally take up the cause of the farmers in Delhi by meeting representatives of like-minded regional parties soon.

"The PM should listen to jan ki baat (people's talk), which he had also reflected as the chief minister of Gujarat when he had recommended making MSP a statutory right as head of the consultative committee of chief ministers. Presently, it seems that the NDA government is shifting its responsibility to private players," Mr Badal said.