During the tour, PM Modi will attend several events and lay the foundation stone for projects worth over Rs 25,000 crores. 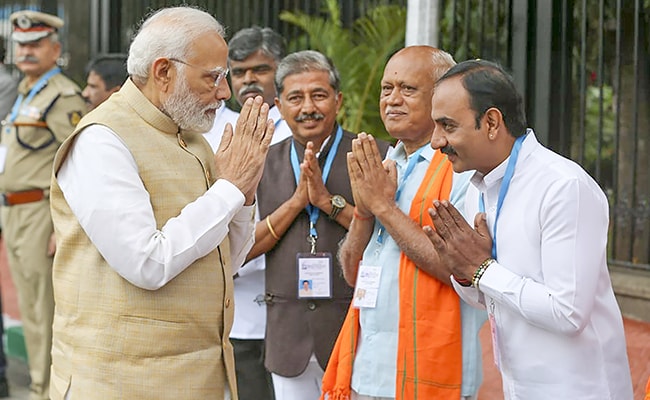 Amid bitter battles between the BJP and several ruling parties in the states, Prime Minister Narendra Modi is visiting four south Indian states in two days. During the tour, PM Modi will attend several events and lay the foundation stone for projects worth over Rs 25,000 crores.

The PM's visit assumes significance as it comes less than six months before Assembly elections in Karnataka, and bitter battles between Centre-appointed Governors and ruling parties in several states.

The PM said his visit is aimed at "strengthening India's growth trajectory", and comes at a time when Congress's Bharat Jodo Yatra which, starting from south India, has been drawing huge crowds and creating a buzz in the media for almost two months now.

"Over the next 2 days, I will be travelling to 4 states in the South- Karnataka, Tamil Nadu, Andhra Pradesh and Telangana to take part in diverse programmes aimed at strengthening India's growth trajectory," the PM had tweeted.

The PM on Friday flagged off south India's first Vande Bharat train -- the Chennai-Mysuru Vande Bharat Express at Kranthiveera Sangolli Rayanna (KSR) Railway Station in Bengaluru. He also paid floral tributes to the statues of poet Kanakadasa and Maharshi Valmiki at the Vidhana Soudha in Bengaluru.

He then inaugurated the Terminal 2 of Kempegowda International Airport in Bengaluru, and unveiled a 108-foot bronze statue of Nadaprabhu Kempegowda at the airport.

The PM is scheduled to visit Tamil Nadu -- a key Opposition ruled state where the BJP has failed to make a mark even after repeated attempts -- later in the day.

Telangana's Chief Minister K Chandrashekar Rao has been a vocal critic of PM Modi and the BJP, and has been travelling to Opposition ruled states in an attempt to stitch together a grand alliance of like-minded parties against the BJP ahead of the next general elections.

In Tamil Nadu, the DMK government has been at loggerheads with the Centre over a host of issues, including what it calls an attempt to impose Hindi on the Dravidian people and the contentious the NEET Exemption Bill.

A major fight is brewing in Kerala, Tamil Nadu, and Telangana between Governors and the state governments.

The Governors in the three states have been accused of acting like "puppets of the Centre" by state governments who have had several run-ins with them on key legislation. Anger against the Centre-appointed Governors has spilled over state boundaries as regional parties look across party lines to consolidate forces and take on the ruling BJP.