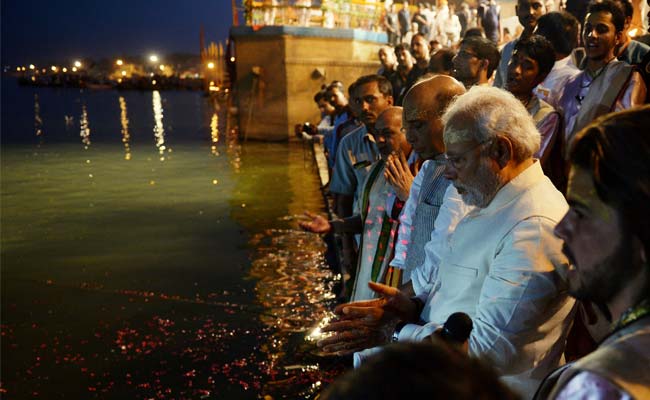 New Delhi: On May 29, three days after he was sworn in as India's 15th Prime Minister, Narendra Modi took to the micro-blogging site, Twitter, to announce his resignation from the Vadodra Lok Sabha constituency. "I will represent Varanasi in Lok Sabha & I look forward to this wonderful opportunity to serve Ganga Maa & work for Varanasi's development," he tweeted.

Mr Modi, 63, has now got cracking on his promise. The Ganga Action Plan, which was till now functioning as an arm of the Ministry of Environment and Forests (MoEF), has been placed under the supervision of Water Resources Minister Uma Bharti, who is also in-charge of the Ganga Mission, and her ministry is likely to be re-christened as Ministry for Water Resources, River Development and Ganga Rejuvenation.

The first meeting of the Inter-Ministerial Group on Ganga, government sources told NDTV, will be held tomorrow, with five ministries coming together to pool their resources to draft a blueprint for the Prime Minister's pet project. The representatives of environment, power, tourism and shipping, besides water resources, will take part in the inaugural brainstorming session.

Each ministry, the sources added, has been tasked with a specific mandate. Tourism minister Shripad Naik, for instance, has been asked to explore and expedite a tourism plan covering the stretch of the river starting from Gangotri, and running through Rishikesh, Hardwar and Varanasi.

Piyush Goyal, who is in-charge of the Power Ministry, has been entrusted with the responsibility of looking after ways to harness hydro-electricity. Environment minister Prakash Javadekar has been assigned with the task of cleaning the river, and the plan to set up a national waterway has been placed under the stewardship of surface transport and shipping minister Nitin Gadkari.

Mr Gadkari has been asked to prep a feasibility study on the proposed river-route at the earliest. It will been divided into segments for development in a time-bound manner.

Promoted
Listen to the latest songs, only on JioSaavn.com
The Prime Minister will personally monitor the implementation of his dream project.