Laying of the foundation stone and flag off of train will be done by the Prime Minister through video-conferencing. 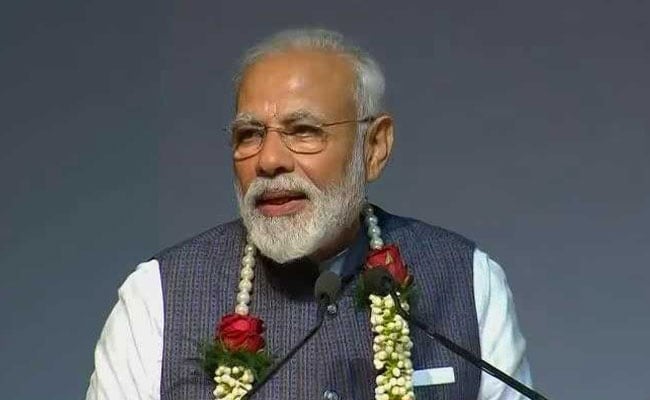 Prime Minister Narendra Modi, addressing a BJP rally in Tamil Nadu's Kanyakumari town, said every Indian is proud that brave Wing Commander Abhinandan Varthaman is from Tamil Nadu. This was the first time that the Prime Minister directly spoke about the IAF pilot who has been in Pakistani custody for the last two days.

PM Modi will unveil a series of development projects for Kanyakumari and Tamil Nadu. These projects will play a vital role in enhancing rail and road connectivity throughout Tamil Nadu. He will be laying the foundation stone for two major railway projects and will also flag off Madurai-Chennai Tejas Express at a function. Laying of the foundation stone and flag off of train will be done by the PM Modi through video-conferencing.

Congress president Rahul Gandhi will address his first campaign rally in Maharashtra for the Lok Sabha elections in Dhule today.

Here are the highlights of the PM Modi rally in Tamil Nadu's Kanyakumari town:

Mar 01, 2019 15:49 (IST)
PM Modi said, We are betting on India's youth and their talent. That is why, the Mudra Yojana was launched to give wings to the spirit of enterprise of young India. 15 crore people have got loans totaling worth over Rs 7 lakh crore. Tamil Nadu is one of the top states under this scheme. India remembers 2009 and how the DMK and Congress allotted portfolios after the elections. Ministers were being picked not by the Prime Minister but by those who had nothing to do with public service. There was telephone bargaining for minister posts.
Mar 01, 2019 15:38 (IST)
Sadly, a few parties, guided by Modi hatred have started hating India. No wonder, while the entire nation supports our armed forces, they suspect the armed forces. The world is supporting India's fight against terror but a few parties suspect our fight against terror. These are the same people whose statements are helping Pakistan & harming India. They are the same people whose statements are being happily quoted in Parliament of Pakistan and in the radio of Pakistan. I want to ask them- do you support our armed forces or suspect them? They should clarify- Do they believe our armed forces or they believe those forces who support terrorism on our soil? I want to tell them- Modi will come and go, India will remain. Please stop weakening India to strengthen your own politics.
Mar 01, 2019 15:36 (IST)
India has been facing the menace of terrorism for years. But, there is a big difference now - India will no longer be helpless in the wake of terror. From 2004 to 2014 there were several terror attacks. The nation expected perpetrators to be punished but nothing happened. 26/11 happened, India expected action against terrorists but nothing happened. Uri happened and you saw what our brave men did. Pulwama happened and you saw what our brave men did. I salute all those who are serving the nation. Their vigilance keeps our nation secure.
There was a time when the news reports would read- Air Force wanted to do surgical strike after 26/11 but UPA blocked it. Today, we are in an era where the news reads- Armed forces have full freedom to do what they want. Influence of terrorists and terrorism has been curtailed and it is going to be curtailed even more. This is a New India. This is an India that will return the damage done by terrorists with interest. The events of the past few days have demonstrated yet again the strength of our armed forces. It has also brought our nation closer. The way the nation has supported our armed forces is extra-ordinary and I bow to every Indian for that.
Mar 01, 2019 15:32 (IST)
PM Modi says it's the NDA government that had the honour of creating a new department for fisheries. The previous government did nothing for the fishermen community. The centre has released over Rs 300 crore towards construction of deep ship fishing vessel. Fishermen in the sea get help from the space. We have provided NAVIK device with the help of ISRO. This navigation device not only provides fishing zone but also weather related information.
Mar 01, 2019 15:28 (IST)
In 2014, it was after thirty years that a party got a full majority in the Parliament. The people's message was clear - they wanted a Government that takes bold and tough decisions, says PM Modi
People wanted honesty, not dynasty.
People wanted development, not decay.
People wanted progress, not policy paralysis.
People wanted opportunities, not obstacles.
People wanted security not stagnation.
People wanted inclusive growth, not vote bank politics.
Mar 01, 2019 15:27 (IST)
India of the 21st century has to work with speed and scale which is what the NDA govt is doing. Recently, PM Kisan yojana was launched which was announced in the budget.
Mar 01, 2019 15:27 (IST)
PM have flagged off the fastest train, Tejas, between Madurai and Chennai. This is one of the most modern trains and is a great example of 'Make in India' having been manufactured in the Integral Coach Factory of Chennai itself : PM Modi
Mar 01, 2019 15:22 (IST)
India is the fastest growing economy in the world and Ayushman bharat is the biggest scheme in the world, says PM Modi.
Mar 01, 2019 15:11 (IST)
Campaigning for lok sabha elections in Tamil Nadu's Kanyakumari, Prime Minister Narendra Modi says, "Everyone is proud that brave Wing Commander Abhinandan is from Tamil Nadu... I am proud that India's first woman Defence Minister Nirmala Sitharaman is from Tamil Nadu."
Mar 01, 2019 15:07 (IST)
Tamil Nadu: PM Narendra Modi speaking at inauguration of different projects in Kanyakumari.
Mar 01, 2019 14:34 (IST)
Prime Minister Narendra Modi has reached Kanyakumari in Tamil Nadu. He will be unveiling series of development projects for Kanyakumari and Tamil Nadu.