PM Modi to Visit China in May, Says Sushma Swaraj 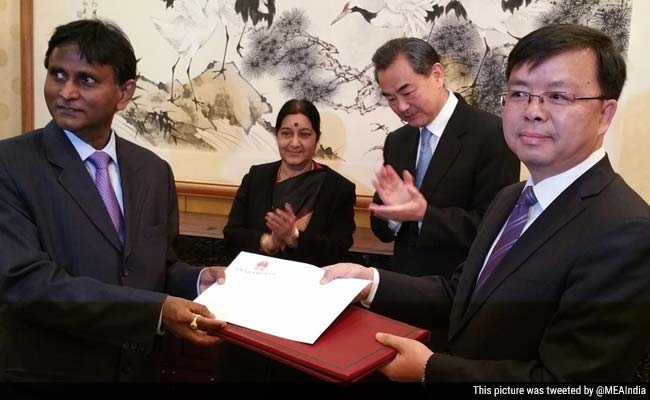 Modalities for operationalisation of the second route of Kailash Manasarovar Yatra has been finalised, said Ms Swaraj.

Prime Minister Narendra Modi will embark on an "outcome-driven" maiden visit to China before May 26, External Affairs Minister Sushma Swaraj said on Sunday as she held talks with her Chinese counterpart on key issues and emphasised that maintaining peace and tranquility at the border was a pre-requisite for the development of ties.

The 62-year-old leader, who is on her first visit to the communist nation after she assumed charge last year, said the Prime Minister would undertake the visit before the BJP-led government completes one year in office.

Ms Swaraj, while addressing the media after a lengthy round of talks with her Chinese counterpart Wang Yi, said modalities for the operationalisation of the second route of the Kailash Manasarovar Yatra in Tibet via Sikkim has been finalised.

Both sides exchanged notes under which the first batch of pilgrims would travel through the route from June this year. Her talks with Mr Wang stretched to over two hours followed by dinner. They discussed the resolution of the border issue, which is being tackled by Special Representatives of both the countries.

Ms Swaraj said Prime Minister Modi and President Xi Jinping were leaders with strong "willpower" and both think out of the box. They could find a solution to the dispute during Prime Minister Modi's "outcome-driven visit", she said.

Both sides agreed that the resolution of the border dispute should not be left to future generations.
Earlier in the day, Ms Swaraj, while addressing an India-China Media Forum at the start of her maiden visit here, said India is committed to an "early settlement" of the issue.

She proposed a six-point template to build Sino-India ties to realise the common dream of the 'Asian Century'. "Our relationship today has reached a level where we have interactions in fields that could not have been imagined some years ago. We have made considerable progress in establishing and expanding defence contacts and exchanges, including across our border. They contribute to the maintenance of peace and tranquility there, a pre-requisite for the further development of our relationship. On the boundary question, my government is committed to exploring early settlement," Ms Swaraj said.

At the meeting with Mr Wang, she held in-depth discussion on bilateral issues.

Ms Swaraj's visit, to make preparations for PM Modi's trip, also set the pace for the 18th round of border talks in which National Security Adviser Ajit Doval would represent India for the first time as Special Representative.

Ms Swaraj and Mr Wang discussed a possible date for the next round of border talks. She will call on Chinese President Xi Jinping tomorrow.

Prime Minister Modi has had three successful meetings with Xi, the most important being the latter's visit to India in September last year.

Once the Kailash-Manasarovar Yatra's second route becomes operational, it is expected to benefit Indian pilgrims. The route begins through Nathu La pass in Sikkim. The existing route through the Lipulekh Pass was badly damaged in the floods in Uttarakhand in 2013.

The new route has good roads and pilgrims, especially older people, can travel by buses directly to their destination. Initially, 250 people will travel in five batches this year, while 900 others would travel through the old route. Talking about Prime Minister Modi's visit, she said he would visit China before end of the first year in office. A contact group is being established by both sides to work out a complete agenda for it, she said.

Ms Swaraj emphasised that "it has to be an outcome-driven visit."

"We both follow independent foreign policy and both give high priority to developing good relations with neighbours," he said.

Mr Wang said there has been good momentum in China-India relations. The leaders of the two sides have stayed in close touch, he said.

Talking about his talks with Swaraj, he said, "We discussed specific measures we can take to deepen the
cooperation in wide range of sectors."

"Leaders of the two countries have set new and important goals for further growth of the strategic cooperative partnership," Mr Wang said.

"We are ready to work with the Indian side to advance this relationship and be good neighbours, enjoying harmonious co-existence as good partners pursuing development," he added.

Ms Swaraj said frequent meetings between the leaders speak about the strength of India-China relations. The relations are getting stronger, she asserted.

Talking about China's mega Silk Road and Maritime Silk Road plans, Ms Swaraj said during the media briefing that India will not provide any blanket endorsement.

"We will look into our interests. Wherever our interests converge we cooperate. No blanket endorsement," she said.

There is a synergy about Bangladesh, China, India Myanmar corridor which is one of the silk road projects, she said.

During the talks, the two sides reviewed implementation of the $20 billion investment commitment made by China in two industrial parks in India, besides China's involvement in modernisation of Indian railways as well measures to be taken to address the staggering $38 billion trade deficit in the $70 billion bilateral trade last year.

Promoted
Listen to the latest songs, only on JioSaavn.com
India has been pressing China to open up to Indian IT, pharmaceuticals and agro products.