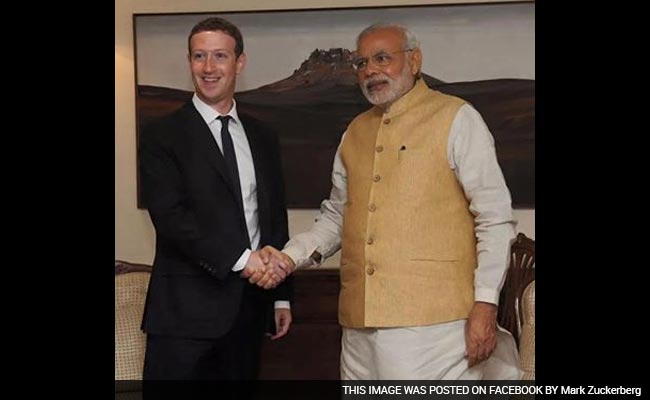 New Delhi: Facebook chief Mark Zuckerberg today invited Prime Minister Modi to the organisation's headquarters in Paolo Alto, US, on September 27, for a Townhall meeting. Thanking him, the Prime Minister, in a Facebook post, said he the interaction will cover a wide range of issues and he expected it to be a memorable session.

"Prime Minister Modi and I will discuss how communities can work together to address social and economic challenges," Mr Zuckerberg said in a post this morning.

The Facebook chief said he invited queries from users, the best of which will be placed before the Prime Minister. He added that he had a chance to visit PM Modi during his visit to India last year and it was "an honor" to host him at the Paolo Alto headquarters.

I thank Mark Zuckerberg for the invite to visit @facebook HQ & for the Townhall Q&A at 10 PM IST on 27th September. https://t.co/tlbCeLZeh4

The youngest billionaire met PM Modi last year when Mr Zuckerberg called on the Prime Minister and expressed his interest in working with the government in the areas of healthcare and education.

In his response, PM Modi invited people to participate by sending in their questions "on the 'Narendra Modi Mobile App'".

PM Modi's trip to the US this September will be his second - his first visit was in September last year, during which he had addressed the UN General Assembly, met a host of industry leaders and was given what was later called a "rockstar reception" at the Madison Square Gardens.

This time, the focus of his visit will be the Silicon Valley. With his new slogan of "Start Up India", the Prime Minister is hoping the trip will provide a chance to understand how India can replicate the success of Silicon Valley back home.

He is expected to meet a number of top executives - including Sundar Pichai at Google, Apple CEO Tim Cook, Adobe CEO Shantanu Narayan and the executives at Tesla. He is also expected to address global media owners and investors at an event hosted by media mogul Rupert Murdoch.

His meeting with US president Barack Obama is scheduled for September 28 on his return from California.