Pravind Jugnauth, along with his wife Kobita Ramdanee, had paid obeisance at the ancient Mata Bagulmukhi temple in Dharamshala on Wednesday, after winning the hard-fought election in his country last month. 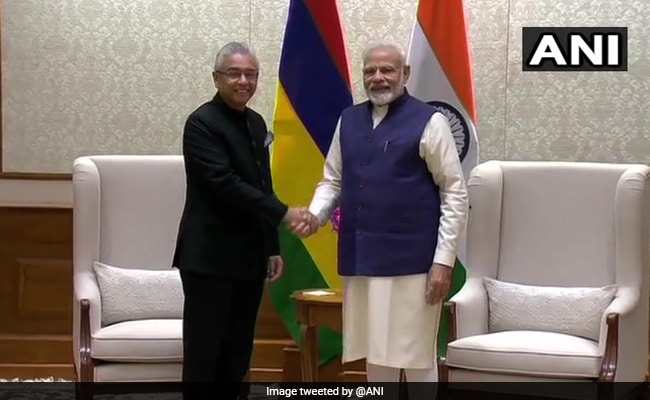 Pravind Jugnauth, along with his wife Kobita Ramdanee, had paid obeisance at the ancient Mata Bagulmukhi temple in Dharamshala on Wednesday, after winning the polls in his country last month.

The Mauritian prime minister visited Dharamshala nearly a month after his party, the Militant Socialist Movement (MSM), won a majority of seats in Parliament.

PM Modi extended his warm felicitations to Prime Minister Pravind Jugnauth on his re-election with a resounding mandate, a Ministry of External Affairs statement said.

Pravind Jugnauth thanked PM Modi and reiterated his commitment to further strengthen and deepen the fraternal and enduring bilateral ties.

PM Modi said the government and people of Mauritius can count on India's wholehearted support and continued solidarity in their aspirations to build a more secure, stable and prosperous Mauritius.

Pravind Jugnauth expressed deep appreciation for India's support in many development cooperation projects being implemented in Mauritius, such as the Metro Express Project, ENT Hospital, Social Housing Project, which have brought real benefits to its people.

Pravind Jugnauth conveyed that accelerating the pace of all-round development of Mauritius and deepening the scope of cooperation with India will be his priorities in the new term.
He expected India to play an important role in this endeavor, the statement said.

"Both leaders agreed to work closely to build upon the close multi-faceted bilateral relations and to explore new avenues of engagement, based on mutual interest and priorities," he said.