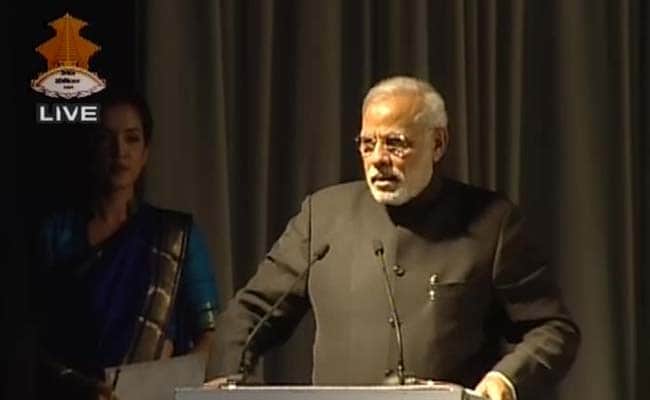 Mumbai: Prime Minister Narendra Modi led the nation in paying homage to the martyrs and victims of the 26/11 Mumbai terror attacks sixth anniversary on Wednesday.

"We remember the horrific terror attacks in Mumbai on this day in 2008 and pay homage to the innocent men and women who lost their lives," Mr Modi said in a message early on Wednesday.

He said the country salutes the brave security personnel who laid down their lives to protect several lives on that fateful day - "They are our true heroes."

"Today is a day to reaffirm our commitment to work together to combat the menace of terror and uproot it from the face of humankind," Mr Modi said.

Chief Minister Devendra Fadnavis said the state would strive to strengthen the police force with better equipments on priority.

"I pay homage to the brave policemen who fought and laid down their lives for us on 26/11. We are proud of them and we will strive hard for the safety and security of our state," Mr Fadnavis assured.

A series of events are scheduled in Mumbai to mark the sixth anniversary of 26/11 and remember the 166 victims, including 26 foreigners, who were gunned down during 60 hours of terror unleashed by 10 Pakistanis.

Commemorations will be held at the Hotel Taj Mahal Palace, Hotel Trident, Chhatrapati Shivaji Terminus, Nariman House, Leopold Cafe, the Mumbai Police Gymkhana, the memorial of martyr Tukaram Ombale who caught one of the 10 terrorists - Ajmal Amir Kasab - alive at Chowpatty, and other targeted sites.

The sites selected by the 10-strong team fell in a four-square km prime hub of Mumbai, including the world heritage building, Chhatrapati Shivaji Terminus, Hotel Taj Mahal Palace and Tower, Hotel Trident, Nariman House, Leopold Cafe, Cama Hospital, Wadi Bunder which is the hub of shipping and transport agencies, and a bomb exploded in one of the taxis taken by them at Vile Parle, a quiet upper middle-class residential locality.
Comments
Narendra Modi26/11 terror attacksMumbai