"PM Modi and PM Kishida had a productive exchange of views on further deepening bilateral relations. They also discussed a number of regional and global issues," the Ministry of External Affairs said in a brief statement. 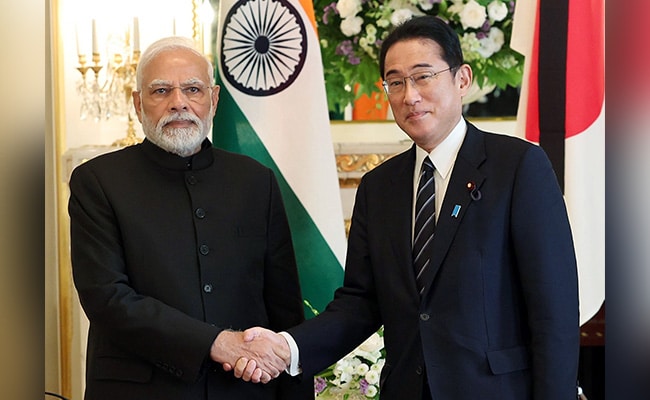 Prime Minister Narendra Modi today said he had a fruitful meeting with his Japanese counterpart Fumio Kishida and conveyed his deepest condolences over the tragic death of former Prime Minister Shinzo Abe, lauding his contributions in strengthening the bilateral strategic partnership as well in conceptualising the vision of a free, open and inclusive Indo-Pacific region.

PM Modi, who is in Tokyo to attend the state funeral of Shinzo Abe, met Prime Minister Kishida ahead of the ceremony and the two leaders renewed their commitment towards further strengthening the India-Japan Special Strategic and Global Partnership, and in working together in the region and in various international groupings and institutions.

"Had a fruitful meeting with PM Kishida. We discussed various bilateral subjects. I conveyed my condolences on the tragic demise of former PM Shinzo Abe," PM Modi tweeted.

"The two leaders had a productive exchange of views on further deepening bilateral relations. They also discussed a number of regional and global issues," the Ministry of External Affairs said in a brief statement.

During the bilateral meeting, Prime Minister Modi conveyed his deepest condolences for the demise of Abe and noted his contributions in strengthening India-Japan partnership as well in conceptualising the vision of a free, open and inclusive Indo-Pacific region.

"I am feeling very sad about the sudden death of former premier Abe... He took Japan-India relations to a greater level and also expanded it in many areas," PM Modi, who shared a close friendship with the Japanese leader, said.

PM Modi recalled that when he visited Japan last time, he had a long conversation with Shinzo Abe. "India is missing Shinzo Abe," he added.

Shinzo Abe, 67, was shot dead while making a campaign speech on July 8 in the southern Japanese city of Nara.

"I am confident that under your leadership, India-Japan relations will deepen further and achieve greater heights," PM Modi told Prime Minister Kishida.

Prime Minister Kishida stated that the period from this year, which marks the 70th anniversary of the establishment of Japan-India diplomatic relations, to next year, when Japan and India will respectively assume the G7 and G20 presidencies, offers an excellent opportunity to further strengthen the "Japan-India Special Strategic and Global Partnership."

The two leaders exchanged views regarding the regional situation, including the situation in Ukraine. They reaffirmed their shared recognition of the importance of peaceful settlement of disputes as well as transparent and comparable development finance, and confirmed to continue working together in view of Japan and India's respective presidencies of the G7 and G20 next year, the statement added.

Prime Minister Kishida visited India for the annual summit in March while PM Modi visited Japan for the Quad Leaders' Summit in May.

"These meetings underscored the two leaders' commitment towards deepening India-Japan ties, particularly in the context of shaping a post-pandemic regional and global order," Foreign Secretary Vinay Kwatra said on Monday ahead of the Prime Minister's visit to Japan.

Mr Kwatra said there is deep convergence between India and Japan in the Indo-Pacific region.

Representatives from over 100 countries, including more than 20 heads of state and governments, attend Shinzo Abe's funeral today.