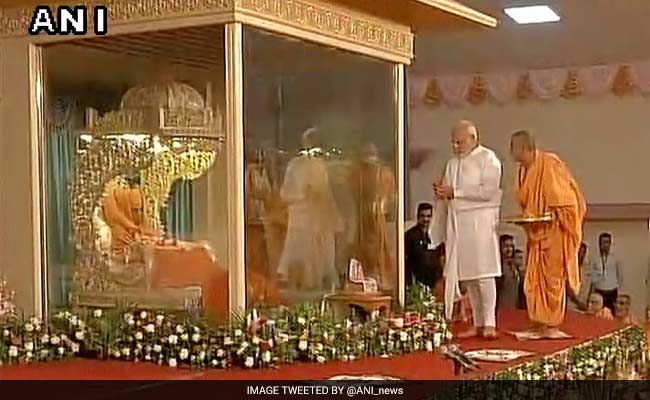 PM Modi arrived in Sarangpur after his Red Fort speech to pay tribute to Pramukh Swami.

Ministers, politicians and devotees on Sunday also visited the Sarangpur-based Swaminarayan temple, where they paid their respect to the 95-year-old spiritual leader.

The mortal remains of the head of Bochasanvasi Akshar Purushottam Sansthan (BAPS) Swaminarayan Sanstha have been kept at the temple till August 17 to enable devotees and citizens to have a final glimpse of the departed soul.

PM Modi has expressed grief through his tweets over Swami's death. PM Modi also shared a photo where he is seen taking blessings from the spiritual leader.

HH Pramukh Swami Maharaj was a mentor to me. I will never forget my interactions with him. Will miss his presence. pic.twitter.com/p4lsx65zjY

Pramukh Swami, who was ailing for some time, died on Saturday evening at the Sarangpur temple, where he was undergoing medical treatment.

Former Finance Minister Saurabh Patel and Leader of Opposition in Gujarat Assembly Shankersinh Vaghela of Congress were also among those who paid their respects to the popular religious leader, who enjoyed a wide following.

As the flow of devotees is expected to increase in days to come, elaborate arrangements have been made, said Mr Rupani.

"To supervise the arrangements in the wake of huge rush of devotees, we have deployed a senior IAS officer and five IPS officers. We have also instructed District Collector and local police to ensure people do not face any problem during their visit," said Mr Rupani.