"We arrived in Amman. I am very grateful to His Majesty King Abdullah II for facilitating flight and access," Prime Minister Narendra Modi tweeted after landing in Jordan. 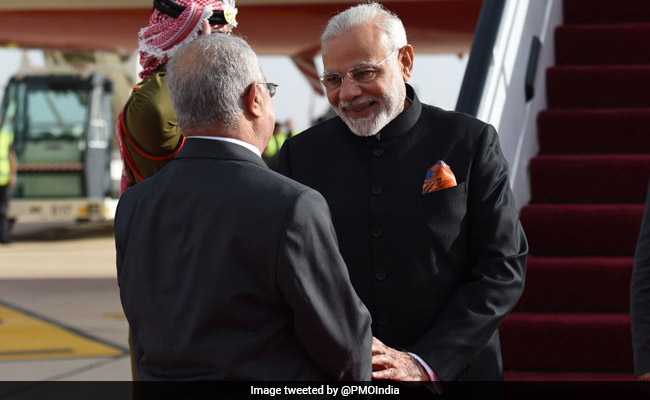 Amman: Prime Minister Narendra Modi today arrived in Jordan on the first leg of his tour of three West Asian countries, including Palestine, during which he would hold talks on deepening cooperation in strategic areas such as security and trade.

"We arrived in Amman. I am very grateful to His Majesty King Abdullah II for facilitating flight and access," Prime Minister Narendra Modi tweeted after landing in Jordan.

The Prime Minister's visit will begin from Palestine from tomorrow after transiting through Jordan, where he will meet King Abdullah later in the day.

PM Modi was received by Jordan Prime Minister Hani Al-Mulki on his arrival in Amman.

"Prime Minister Modi warmly received by Prime Minister of Jordan on his arrival in Amman. This is Modi's first visit to the country and also the first visit by an Indian PM in 30 years. India and Jordan enjoy friendly ties since diplomatic relations were established in 1950," Raveesh Kumar, Ministry of External Affairs Spokesperson, tweeted.

Describing the Gulf and West Asia region as a "key priority" in India's external engagement, PM Modi ahead of his visit said his trip was aimed at strengthening ties with the region.

He said it would be his fifth visit to the Gulf and the West Asian region since 2015.

Promoted
Listen to the latest songs, only on JioSaavn.com
"This region is a key priority in our external engagement. We enjoy vibrant multi-dimensional ties with the countries here. I look forward to strengthening India's growing and important ties with West Asia and the Gulf region through the visit," PM Modi had said in his departure statement.

More than nine million Indians work and live in the Gulf region, of which about one third live in the UAE alone. In Oman, they constitute the largest expatriate community, he noted.