"The PM is mad, which is why he is claiming so many seats from Bengal. Modi-ji you can't take care of your wife, how can you take care of the country?" Mamata Banerjee said. 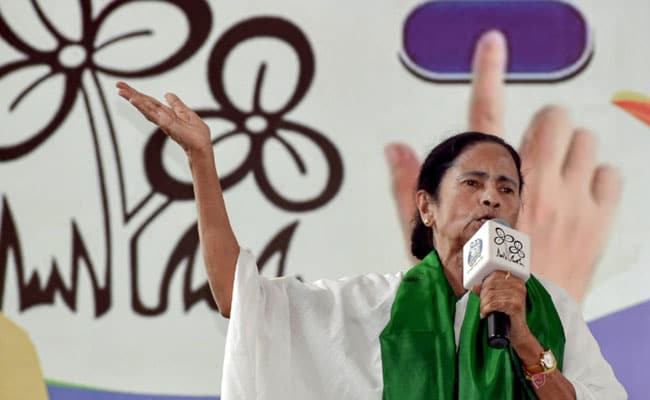 Then targeting the Prime Minister, she said, "The PM is mad, which is why he is claiming so many seats from Bengal. Modi-ji you can't take care of your wife, how can you take care of the country?"

The Commission's decision - likely a first in the country -- came this evening, hours after the BJP had requested it to ban Mamata Banerjee from campaigning. Ms Banerjee's Trinamool Cngress had also met the Commission and accusing the BJP of being responsible for violence, asked for action.

Both the BJP and Trinamool have blamed each other for Tuesday's violence, during which a bust of Ishwar Chandra Vidyasagar -- a 19th century social reformer much revered in Bengal - was smashed by miscreants. Both parties have cited tit-for-tat videos to substantiate their claims.

The violence, Mamata Banerjee said today, was orchestrated on the direction of PM Modi and Amit Shah. And she invoked the self-respect of Bengal, saying the people have been insulted by both Amit Shah and the Election Commission.

While Amit Shah insulted the people by desecrating Vidyasagar's statue by goons from outside the state who are clueless about Bengal's history and culture, the Commission has done so by letting the culprits go, she said.

She also said the Election Commission has no basis for their decision to cut short the campaign by invoking the Article 324 of the constitution. "There is no law and order problem in Bengal...This was just one rally," she said.

The Commission, for the first time, had used Article 324 to restrict election campaigns. So far, it has been used for cancellation or postponement of election or penalising individual candidates.

Nine of Bengal's 42 seats will vote on Sunday in the last round of the mammoth, seven-phase national election. Violence, though, was reported from the state during every phase, with several candidates and workers of the BJP being targeted, allegedly by Trinamool supporters.

Today, at a rally in Bengal's Bashirhat, PM Modi said the Bengal Chief Minister is afraid of the outcome of the election and is "scared of her own shadow".

"Mamata didi had declared publicly two days ago that she will take revenge (inch inch ka badla). She fulfilled her agenda within 24 hours, BJP President Amit Shah's road show was attacked," PM Modi said. "Mamata didi got scared after seeing the BJP wave in the state. And everyone now knows what she is capable of when scared," he said.