The New Delhi Municipal Council had proposed in April that Teen Murti Marg and Teen Murti Chowk be renamed Haifa ahead of PM Modi's visit to Israel, the first by an Indian prime minister. 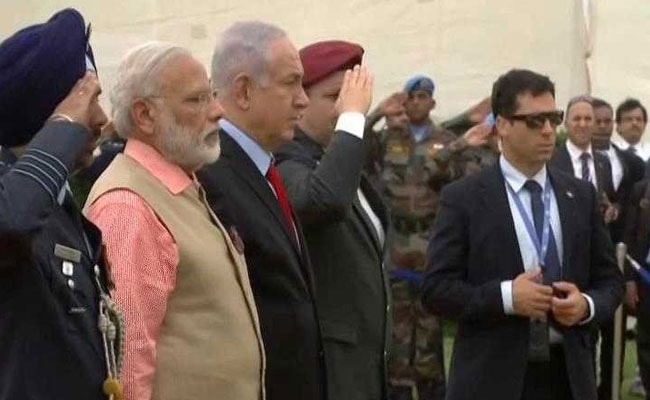 New Delhi: Prime Minister Narendra Modi visited Haifa today, but the proposal mooted by New Delhi Municipal Council (NDMC) more than two months ago to rename a prominent road in Lutyens Delhi after the Israeli city has been postponed.

The NDMC had proposed in April that Teen Murti Marg and Teen Murti Chowk be renamed Haifa ahead of PM Modi's visit to Israel, the first by an Indian prime minister.

"No final call has been taken on the proposal yet. It was deferred in the April meeting and has not been taken up since then. We are not sure whether it will be scrapped totally or reconsidered later," NDMC Vice Chairman Karan Singh Tanwar told PTI.

In a meeting on April 24, some council members had claimed the proposal had been passed but the civic body chairman, Naresh Kumar, had announced hours later that the issue was deferred.

The proposal has not been taken up in any council meeting since then.

Prime Minister Narendra Modi, who is on a three-day visit to the Jewish nation, visited Haifa and paid homage to Indian soldiers who fought in the World War I.

The Israeli city was liberated from Ottoman occupation by Indian soldiers during the war.

A large number of Indian soldiers of the 15th Imperial Service Cavalry Brigade died during the battle to free the city and nearly 900 are buried in Israel.

September 23 is celebrated as Haifa Day in India and Israel every year as a mark of respect for the soldiers who lost their lives in the battle and to mark the end of 400 years of Turkish control over the city.

Demands to rename Teen Murti Road and Chowk have been made over the past few years by different organisations, including the RSS.

Senior RSS functionary Indresh Kumar had said in 2015 that the government should acknowledge the role played by the three regiments of the Indian Army in the Battle of Haifa in 1918.

According to the Ministry of Culture, a "wrong impression" has been built about the Teen Murti Chowk that it has something to do with Mahatma Gandhi.

"The Teen Murti Chowk was named to mark the role of the three cavalry regiments. But no one knows this today. The moment people think of the Teen Murti they think of Gandhiji's monkeys. This is a wrong impression that needs to be corrected," it had earlier said.