Abhijit Banerjee, named for the prestigious award along with Esther Duflo and Michael Kremer, has been a strong and vocal critic of the BJP-led government's economic policies. 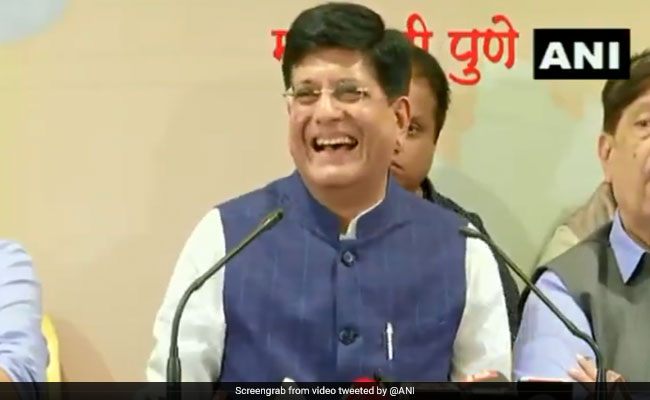 Piyush Goyal said he feels at Dr Banerjee's Nobel, but didn't agree with him (File)

Nobel winner Abhijit Banerjee is "totally Left-leaning" and his theories have been rejected by the people of India, Union Minister Piyush Goyal said on Friday, just a beat after congratulating the renowned economist. Abhijit Banerjee, named for the prestigious award along with Esther Duflo and Michael Kremer, has been a strong and vocal critic of the BJP-led government's economic policies.

"Abhijit Banerjee won the Nobel prize, I congratulate him. But you all know what his understanding is. His thinking is totally Left-leaning. He had praised the NYAY scheme effusively, but the people of India totally rejected his thinking," Piyush Goyal said at a press conference.

The NYAY or Nyuntam Aay Yojana is a minimum income guarantee scheme that headlined the Congress manifesto for the national election earlier this year. The party crashed in the polls. Rahul Gandhi, in his tweet congratulating Mr Banerjee for his Nobel, credited him with the NYAY plan.

"I congratulate Abhijit Banerjee and I feel proud as an Indian, it is not necessary we have to agree with him. Especially when the public has rejected his suggestion," Mr Goyal said.

Dr Banerjee's views over the years have not endeared him to the ruling party. He has not minced words about demonetization being an ill-considered move.

Recently, Dr Banerjee criticized the state of the economy in India. He said when the economy is going into a "tailspin", it is the time when "you don't worry so much about monetary stability and you worry a little bit more about demand. I think demand is a huge problem right now in economy."

Speaking at the MIT, he said: "There is an enormous fight going on in India about which data is right and the government has a particular view of (that) all data that is inconvenient to it is wrong. But nonetheless, I think that this is something that I think even the government is increasingly recognising that there is a problem. So the economy slowing very very fast. How fast we don't know, there is this dispute about data but I think fast."