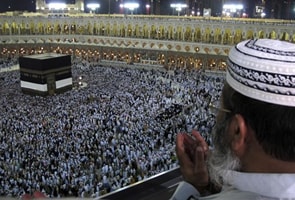 New Delhi: The Supreme Court wants the central government to phase out its policy of giving subsidies to Haj pilgrims.

Here are the 10 big facts of the case:

1. Directing the government to progressively "eliminate" its subsidy within a period of 10 years, a bench of justices Aftab Alam and Ranjana Prakash Desai said today, "We hold that this (subsidy) policy is best done away with." This interim order is also applicable to the Haj pilgrimage of 2012. (Read: Supreme Court's full order on Haj subsidy)

2. The bench also directed the government to reduce the number of its representatives in the Prime Minister's goodwill delegation from 30 to two.

3. The court also said that it will look into the functioning of the Haj Committee of India and its process for selecting people for the pilgrimage.

4. The court was hearing an appeal filed by the Centre challenging a Bombay High Court judgement which had directed the Ministry of External Affairs to allow certain private operators to handle 800 of the 11,000 pilgrims earmarked under the VIP quota subsidised by the government. The bench had expanded the purview of the plea and decided to look into the legality of the government's policy on granting subsidies to Haj pilgrims.

5. BJP's Shahnawaz Husain said,"The BJP is in favour of abolishing the Haj subsidy, but at the same time we want the government to ensure facilities for those going on Haj."

6. Muslim members of Parliament have welcomed the decision. "The Haj subsidy of Rs 600 crore is given to Air India and not pilgrims...Under this garb of subsidy, it (money) is going to Air India which is a sick airline," Majlis-e-Ittehadul Muslimeen (MIM) chief Asaduddin Owaisi told reporters.

7. A senior member of Jamiat Ulema-e-Hind, Niyaz Farooqi, said the government should shift focus on providing better accommodation and food facility to the pilgrims, he said adding, "Despite the subsidy, pilgrims have to pay extra for the trip."

8. In an affidavit, the Centre had told the court that it has decided to restrict Haj pilgrimage at government subsidy to Muslims only as a "once in a lifetime" affair as against the existing policy of "once in five years". It had said the new guidelines have been framed to ensure that priority is given to those applicants who have never performed Haj.

9. The government, however, had refrained from disclosing the amount of subsidy being incurred by it for 2012, saying, "The exact figure in respect of the travel subsidy to the pilgrims going through Haj Committee of India for 2012 will be known after the Hajis completed their Haj journey and return to India."

Promoted
Listen to the latest songs, only on JioSaavn.com
10. India has a quota of 1.70 lakh pilgrims every year. Of these, about 1.25 lakh are selected through Haj committees. Rest of the pilgrims go through private operators. The government subsidy is approximately Rs. 40,000  for each pilgrim selected by the Haj Committees.