Another Boy Falls Into Borewell In Punjab, Days After 2-Year-Old's Death

The four-year-old, Pradeep, fell into a 25-foot deep borewell in Punjab's Pathankot. 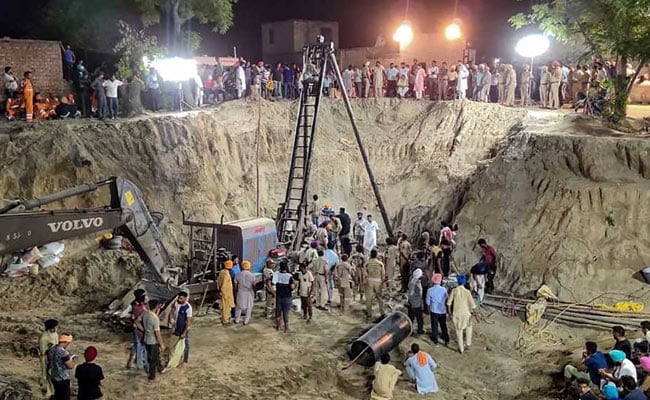 The death of Fatehveer, who fell into a 150-foot deep borewell, sparked widespread outrage (File Photo)

A four-year-old boy fell into a borewell in Punjab and remained stuck there for hours. This fresh incident comes days after Fatehveer Singh, a two-year-old boy died after he was stuck inside a borewell for nearly 110 hours in Punjab's Sangrur. The boy, who fell almost 125 feet inside the borewell, died two days before his body was pulled out.

The four-year-old, Pradeep, fell into a 25-foot deep borewell in Punjab's Pathankot, around 230 km away from state capital Chandigarh. The boy had fallen into the borewell on Thursday night. He was however, pulled out hours after he fell. The boy was then taken to a hospital in Pathankot.

The death of Fatehveer sparked widespread outrage and prompted the state government to shut open, unplugged borewells across the state.

Punjab's AAP leader Bhagwant Mann, who visited the site, accused the government of "inordinate delay" in the rescue operation.

A member of the child's family alleged the child died because of negligence from authorities.

"They did not use proper technique to rescue him early on. Trial and error methods were adopted for days. Where were the modern methods and technology?" he was quoted as saying by news agency PTI.

Officials dug a parallel tunnel to rescue the child. However, the boy's body, tied in strings, was pulled out of the main borewell. The move had angered locals, who protested by blocking several roads of the district.

Days after the incident, the state government said it took several measures, including plugging 45 open borewells across Punjab and announcing a reward of Rs 5,000 for anyone who would report open, unplugged borewells.