Parliament Monsoon Session: The House witnessed five adjournments as some opposition members continued protests over the suspension of members.

Parliament Monsoon Session: The Monsoon session is scheduled to conclude on October 1. (File)

Rajya Sabha was adjourned for the day amid uproar by opposition members over the suspension of eight MPs, including TMC leader Derek O'Brien and Sanjay Singh of AAP, for the remaining part of the Monsoon session over their "unruly behaviour" during the passage of farm bills.

The proceedings of the House were almost washed out as it could not take up any legislative business. Earlier in the day, some members managed to raise issues during Zero Hour.

The House witnessed five adjournments as some opposition members continued protests over the suspension of members.

As soon as the House resumed at 12 pm, Bhubaneswar Kalita, who was in the chair, asked the suspended members to leave the House and urged members to maintain decorum.

However, the opposition members refused to budge forcing the Chair to adjourn the House for the day.

Earlier in the day, Chairman M Venkaiah Naidu termed the behaviour of members during the passage of the bills on Sunday as "very unfortunate, unacceptable and condemnable" and one that has "tarnished" the image of Parliament, particularly the House of Elders.

Here are the Highlights from the Parliament Monsoon Session 2020:

Sep 21, 2020 22:46 (IST)
Farm bills will lead to famine, BJP operating like fascist regime: Mamata Banerjee
West Bengal Chief Minister Mamata Banerjee on Monday attacked the BJP-led central government over the passage of two farm sector reform bills, claiming that the "anti-farmer" legislations which were bulldozed through the Rajya Sabha by a "fascist" regime will lead to famine.
Urging all opposition parties to come together and fight the bills tooth and nail to protect the rights of farmers, the Trinamool Congress supremo slammed the decision to suspend eight Rajya Sabha MPs for protesting against the farm bills and said that it is a "black day for democracy".
"These bills will push the country towards famine. They (the Centre) have failed to curb the COVID-19 pandemic and are now creating a food pandemic. They will be responsible for this famine," she claimed while addressing a press conference.
Sep 21, 2020 22:20 (IST)
Decision to hike MSP will benefit crores of farmers: PM Modi
Prime Minister Narendra Modi on Monday hailed the hike in the minimum support price (MSP) of six rabi crops as "historic", saying it will empower farmers and contribute to doubling of their income.
He also said it is his government's great privilege to work for the welfare of farmers.
"Higher MSP will empower farmers and contribute to doubling of their income. Increased MSP, along with the series of agriculture reforms passed by Parliament will ensure dignity and prosperity of farmers. Jai Kisan!" PM Modi tweeted.
Sep 21, 2020 21:16 (IST)
AAP announces support to farmers' September 25 Punjab bandh call
Punjab's main opposition party AAP on Monday decided to support the September 25 Punjab ''bandh'' call given by various farmers'' outfits against the three new farm bills.
"Aam Aadmi Party, Punjab announces its full support to farmers strike on September 25 against the anti-agriculture laws," said AAP in a statement.
As many as 30 farmers' outfits have already given a call for the complete shutdown of Punjab on September 25 in protest against the three farm bills.
Sep 21, 2020 20:29 (IST)
Union minister Ravi Shankar Prasad slams opposition leaders for Rajya Sabha ruckus
The government on Monday accused opposition leaders of irresponsible conduct in the Rajya Sabha during the passage of the farm bills and said they violated rules by not vacating the House despite being suspended.
Union minister Ravi Shankar Prasad said the conduct of opposition leaders in the Upper House of Parliament on Sunday was "shameful" and "irresponsible".
Opposition Rajya Sabha members despite being suspended did not leave the House on Monday which was an open violation of the rules, Prasad said.
"We had a clear majority in Rajya Sabha on farm bills," he said, adding that 110 members supported the bills and a little over 70 opposed it.
Sep 21, 2020 20:05 (IST)
Congress to launch nationwide stir against farm bills from September 24
The Congress will launch a nationwide agitation from September 24 against the Central government for passing the farm bills, said the party after a meeting of all general secretaries of All India Congress Committee (AICC) on Monday.
Senior Congress leader AK Antony said, "The Congress is launching an agitation against the government for passing the anti-farmer and anti-people laws."
Senior Congress leader Ahmad Patel, who was also present during the meeting said, "The government has destroyed the democratic system. The agricultural bills are neither in the interest of the state government nor the farmers. We raised our voice against this in Parliament will now take to the streets."
Sep 21, 2020 19:05 (IST)
Union Minister Ravi Shankar Prasad says today's conduct of the suspended members of not refusing the House (Rajya Sabha) in spite of a declaration of suspension by the Chairperson is illegal and further aggravates their conduct as far as violating norms of the House is concerned.
Sep 21, 2020 18:18 (IST)
Ordinances being promulgated on pretext of Covid-19: Congress MP
Congress MP Adhir Ranjan Chowdhury in the Lok Sabha says: "I took a serious exception to the way one after another Ordinances are being promulgated on the pretext of Covid-19. What I would suggest the government, is that the promulgation of ordinances shouldn't be taken as a rule. It should be considered as an exception."
"What I am afraid of is that this Ordinance-savvy government, on one pretext or the other, is resorting to the promulgation of the Ordinance," he said.
Sep 21, 2020 18:03 (IST)
Centre should assure farmers it will continue procuring paddy, wheat at minimum support price: Congress leader
The Centre should assure farmers it will continue to procure paddy and wheat at minimum support price as the passage of two farm-related Bills has created apprehension among the farming community whether the FCI will purchase their crops, Congress MP Manish Tewari demanded.
Speaking in the Lok Sabha, he also said the government should ensure the Food Corporation of India (FCI), the nodal agency for procurement and distribution of food grains, continue to give funds to state procurement agencies to carry out purchase operations smoothly.
Sep 21, 2020 17:08 (IST)
Shiromani Akali Dal delegation meets President over farm bills
A delegation of Shiromani Akali Dal met President Ram Nath Kovind today over farm bills passed in the Parliament, reports news agency ANI.
"We requested him not to sign on 'anti-farmer' bills that have been forcefully passed in Rajya Sabha. We requested him to send back the bills to the Parliament," says Shiromani Akali Dal president Sukhbir Singh Badal.
Sep 21, 2020 16:56 (IST)

We know what happened in northeast, how things changed there in last 50 yrs & a particular religion rose. There's govt & intelligence report that how insurgency increased there with money under FCRA: SP Singh, BJP while discussing Foreign Contribution (Regulation) Amendment Bill pic.twitter.com/pyNlghib6R 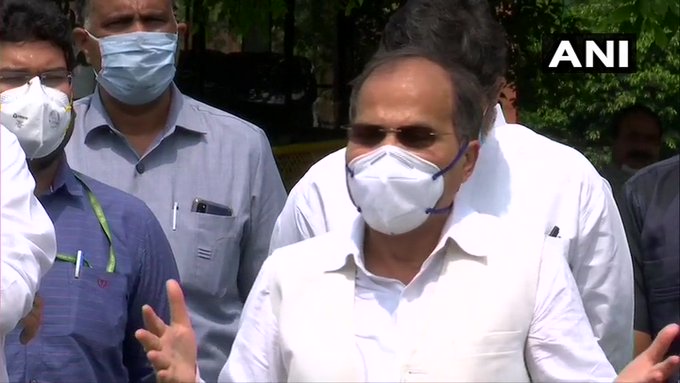 Sep 21, 2020 13:51 (IST)
"Some Fear Control Slipping Away": PM's Dig At Opposition On Farm Bills
Prime Minister Narendra Modi today said the proposed farming laws at the centre of a huge controversy are "historic and necessary" for the country to move forward in the 21st Century. In an attack on the opposition, he also indicated that they are the architects of the controversy, instigating farmers with lies as they "feel control slipping away". Read Here
Sep 21, 2020 13:49 (IST)
Kapil Sibal Slams Centre

Gainers :
Adani and Ambani
FCI ( will withdraw from procurement)
Government

Losers
Millions of poor marginalised farmers
who have no bargaining capacity

Sep 21, 2020 13:06 (IST)
MPs of opposition parties, including the suspended MPs, hold protest in front of Gandhi statue in the Parliament premises

Watch | MPs of opposition parties, including the suspended MPs, hold protest in front of Gandhi statue in the Parliament premises #RajyaSabhapic.twitter.com/pKieNSBvIa

'Muting Of Democratic India' continues: by initially silencing and later, suspending MPs in the Parliament & turning a blind eye to farmers' concerns on the black agriculture laws.

This 'omniscient' Govt's endless arrogance has brought economic disaster for the entire country.

Division of vote is not possible when MPs sabotage public property in the House and throw rule books at the Chair. Opposition hooliganism in Parliament to grab eyeballs is the real threat to democracy. #JaiKisan

Sep 21, 2020 11:18 (IST)
Rajya Sabha Adjourned Till 12 Noon
Amid continuous protest by the Opposition members over the suspension of eight Members of Parliament (MP), the Rajya Sabha was adjourned for the fourth time till 12 noon.
Sep 21, 2020 11:17 (IST)
In the chair, Bhubaneshwar Kalita, asks suspended members to leave the House as Opposition leaders continue sloganeering

He says,"LoP will speak but suspended members should be out of this House. House has to be in order. Also, request MPs to follow COVID protocol." pic.twitter.com/RhI8ihTdvV

Sep 21, 2020 11:14 (IST)
Rajya Sabha Resumes
Proceedings of the Rajya Sabha resumes with Bhubaneswar Kalita as the presiding officer.
Sep 21, 2020 10:27 (IST)
Congress Lok Sabha MP Suresh Kodikunnil gives adjournment motion of the business of the house 'for the purpose of discussing the suppression of rights of farmers of the country.'
Sep 21, 2020 10:26 (IST)
Amendments of several members for referring the matter to Select Committee were not taken up for disposal before passing of the farm Bill by so-called "voice vote." The role of Chair in this context was ex facie 'partisan', unprecedented and unlawful: TMC MP Sukhendu Sekhar Ray.
Sep 21, 2020 10:12 (IST)
Rajya Sabha Adjourned Till 10:36 AM Today
Deputy Chairman Harivansh adjourns the proceedings of the Rajya Sabha till 10:36 am.
Sep 21, 2020 10:08 (IST)
The suspended members have no right to be in the House. The House cannot function with the presence of non-members: Rajya Sabha MP V. Muraleedharan.

The suspended members have no right to be in the House. The House cannot function with the presence of non-members: Rajya Sabha MP V. Muraleedharan

I urge the members named by the Rajya Sabha Chairman to not take part in the House proceedings: Deputy Chairman Harivansh pic.twitter.com/7Lb4sUw6mJ

No-confidence motion against the Deputy Chairman is not admissible under the rules: Rajya Sabha Chairman M Venkaiah Naidu https://t.co/BSjWnK4lvf

"We welcome the farm bill but the central govt should think more about the farmers. They should exclude the role of middlemen & take steps to ensure that farmers don't commit suicide," say farmers. pic.twitter.com/SpzAKItsQx

Sep 21, 2020 08:37 (IST)
"Watershed Moment In History Of Agriculture": PM After Farm Bills Passed
Prime Minister Narendra Modi on Sunday said the passing of the farm bills in parliament was a "watershed moment in the history of Indian agriculture" as he hailed the laws cleared by the Rajya Sabha amid major chaos and drama. "A watershed moment in the history of Indian agriculture! Congratulations to our hardworking farmers on the passage of key bills in Parliament, which will ensure a complete transformation of the agriculture sector as well as empower crores of farmers," he tweeted.
Sep 21, 2020 08:32 (IST)
Rajnath Singh's "Main Bhi Kisan" Retort To Attacks On Farm Bills
The unprecedented "drama" by the opposition in Rajya Sabha during the passage of the farm bills was an "attempt to confuse farmers", Union minister Rajnath Singh said on Sunday. Read Here
Sep 21, 2020 08:31 (IST)
Opposition leaders meeting at 8.45 am as they are upset with how business was conducted  They are going to counter any attempt of the government.