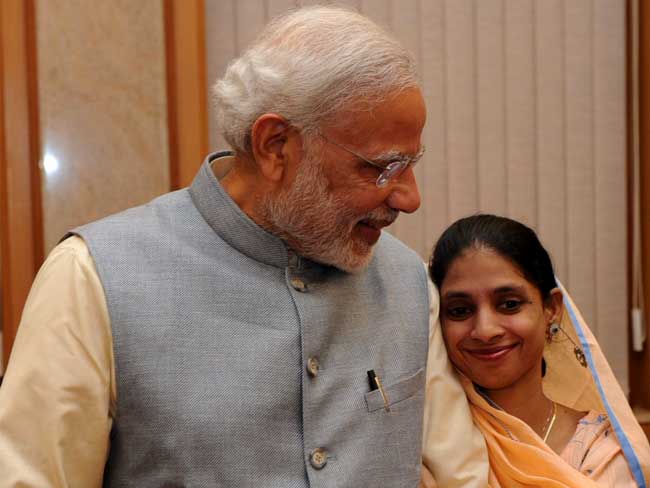 Prime Minister Narendra Modi had announced Rs one crore for Edhi Foundation as a token of appreciation yesterday for taking care of Geeta.

Karachi: Pakistan's charity organisation, the Edhi Foundation today turned down Rs one crore donation announced by Prime Minister Narendra Modi for taking care of the hearing and speech impaired Indian girl, Geeta during her over a decade-long stay in the country.

Prominent philanthropist Abdul Sattar Edhi, who is the founder and head of the Edhi Foundation, thanked PM Modi for announcing the donation, but declined to accept it for his charity.

PM Modi yesterday met Geeta, who returned to India to an emotional welcome, and hailed Karachi-based Edhi family for taking care of her with love and affection for so many years.

"What the Edhi family has done is too priceless to be measured but I am happy to announce a contribution of Rs one crore to their foundation," PM Modi had said.

Geeta was reportedly just seven or eight years old when she was found sitting alone on the Samjhauta Express by the Pakistan Rangers 15 years ago at the Lahore railway station.

She was adopted by the Edhi Foundation's Bilqis Edhi and lived with her in Karachi. Bilqis and her grandchildren, Saba and Saad Edhi, are accompanying Geeta to India.

Geeta yesterday returned to New Delhi but failed to recognise a family which she had initially identified from photographs.

She refused to recognise the Mahato couple from Bihar which she had identified from photographs and added that she will be kept in an institution in Indore till her "real family" was found.