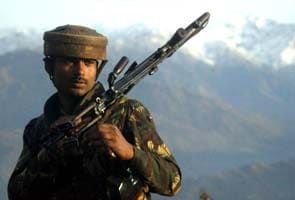 Jammu: Pakistani troops today violated the ceasefire for the fifth time in the last three days by targeting forward Indian posts along the Line of Control (LoC) in Jammu and Kashmir's Poonch district with mortar shells, rockets and small arms firing.

Indian troops retaliated to firing from the Pakistani side resulting in heavy exchange of fire.

"It was yet another ceasefire violation by Pakistan", the spokesman said, adding the firing took place from 0150 hours till 0600 hours.

There was no loss of life or injury to anyone in the Pakistani firing, Mr Acharya said.

Pakistani troops fired at 11 posts in Digwar, Mankote and Durga Battalion areas along the LoC in Poonch.

Promoted
Listen to the latest songs, only on JioSaavn.com
Pakistani troops had fired at Durga Battalion area with small arms firing and mortars along LoC in Poonch around 2150 hours last night. The firing continued for three hours and Army troops from this side retaliated, he said.