Two Indian battle ships, including INS Kolkata, which is the biggest indigenously built stealth destroyer along with INS Shakti, one of biggest fleet support ships, took part in the parade. 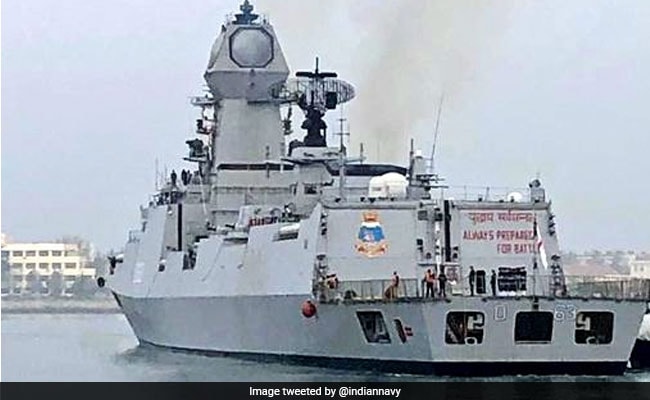 A total of 32 vessels of the People's Liberation Army Navy (PLAN) sailed in six groups, and 39 warplanes of the navy flew in ten echelons at the parade presided over by Chinese President Xi Jinping who is also the head of the military besides being the chief of ruling Communist Party of China (CPC).

Besides its first aircraft carrier Liaoning, which is a refit of former Soviet Union ship, China displayed its latest nuclear submarines, destroyers and fighter jets.

However, the weather played spoil sport as the sky remained hazy and hundreds of guests had to watch it in poor visibility.

Two Indian battle ships, including INS Kolkata, which is the biggest indigenously built stealth destroyer along with INS Shakti, one of biggest fleet support ships, took part in the parade.

INS Kolkata is commanded by Captain Aditya Hara. It is equipped with the latest weapons, including the supersonic Brahmos missiles and sensors. It is capable of simultaneously engaging multiple threats from the air, sea and underwater.

Significantly conspicuous by their absence were the ships of Pakistan Navy at the parade. Pakistan Navy reportedly could not send its ships to PLAN's most celebrated moment despite the all-weather relations due to recent Indo-Pak hostilities after the Pulwama terrorist attack in February.

Besides being the closest ally of China, Pakistan is the biggest procurer of Chinese weapons systems. China is currently building four most advanced naval frigates for Pakistan.

The US too has not sent any of its warships. However, Russia and Japan besides India and Singapore have sent their most modern ships.

About 18 vessels from 13 countries took part in the show.

At the commencement of Tuesday's parade, the vessels whistled and officers and soldiers stood in a ceremonial formation, saluting President Xi as they passed by.

"Salute to you, comrades," Xi called out to the officers and soldiers.

"Hail to you, chairman," they replied.

For its part, the PLAN showcased the event to display its growing might as it is currently the world's fastest growing navy with new vessels being added to the fleet on monthly basis.

While it has one aircraft carrier, the Liaoning which was commissioned in 2012, its second indigenously built aircraft carrier is currently undergoing trials and third one is being built at a feverish pace. China plans to acquire about five to six aircraft carriers in the coming years, according to reports in the official media.

As part of new military doctrine advocated by Xi, regarded as the most powerful leader of China in recent years, the Chinese military, the largest in the world, has cut down the size of its army by three lakhs in the last few years and expanded its navy and air force manifold to enhance its global influence.

The Chinese navy for the first time in its history has logistic bases in Djibouti in the Indian Ocean and Pakistan's Gwadar port in the Arabian Sea. China has also acquired Sri Lanka's Hambantota port as a debt swap, though the Sri Lankan government asserts that it would remain a commercial port.

Earlier, in a group meeting with heads of the foreign delegations to the multinational navy events, President Xi called for joint efforts to address common threats and challenges at sea.

"The blue planet humans inhabit is not divided into islands by the oceans, but is connected by the oceans to form a community with a shared future, where people of all countries share weal and woe," Xi was quoted as saying by state-run Xinhua news agency.