Rahul Gandhi hosted the Iftar event on Wednesday at a luxury hotel in New Delhi, the first organised by him as Congress president. 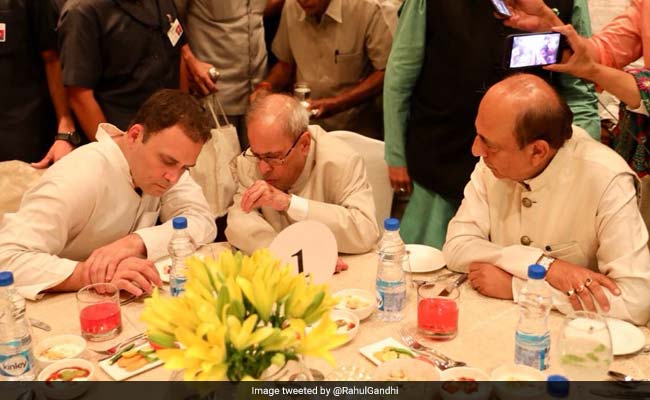 Rahul Gandhi's Iftar party on Wednesday was the first organised by him as Congress president.

In a departure from the past, the Congress did not invite the Pakistan High Commissioner to an Iftar party hosted by Rahul Gandhi that was attended by envoys of several Islamic nations.

Rahul Gandhi hosted the Iftar event on Wednesday at a luxury hotel in New Delhi, the first organised by him as Congress president.

The Congress had invited high commissioners and ambassadors of several Islamic countries, including Bangladesh, at the Iftar, but the party's top brass did not invite the Pakistan High Commissioner in India to avoid criticism by the ruling BJP, sources said.

During the last Iftar, hosted by former Congress chief Sonia Gandhi, the then Pakistan High Commissioner was invited.

No invitation was sent to Pakistan and Israel. The Palestinian ambassador attended the Iftar, a senior Congress leader said

"Congress was careful with the invites. Since India has not resumed dialogue process with Pakistan we did not invite them," another leader said. He also said the Iftar was held on a day four BSF personnel were killed in cross-border firing by Pakistan in Jammu and Kashmir.

Diplomats who attended the event included the British High Commissioner, the Ambassador of Russia, the Charge de Affairs of China, Minister Political from the US, and high commissioners of South Africa and Australia.

The Bangladesh High Commissioner and the Bhutanese Ambassador and representatives of Central Asian countries, including Azerbaijan, Kazakhstan and Uzbekistan, were also there.

Promoted
Listen to the latest songs, only on JioSaavn.com
Comments
Rahul Gandhiiftar