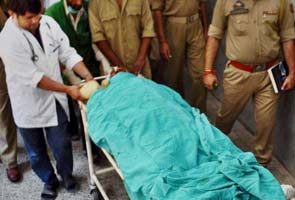 New Delhi: Pakistan has asked India to allow a prisoner who is fighting for his life after being attacked in a Jammu prison to return home.

A statement from the Pakistan High Commission in Delhi sought the prisoner's release "on humanitarian grounds" and said India should provide the assistance Pakistan will need in flying the injured man home in an air ambulance.

54-year-old Sanaullah was hit with bricks by a former soldier convicted for murder, said jail officials. The assault took place when the inmates were gardening. He was air-lifted to a larger hospital in Chandigarh this afternoon. (Read: five facts about Sanaullah)

Pakistan has described the attack as retaliation for the case of Indian prisoner Sarabjit Singh who was fatally attacked in a Lahore prison and died yesterday. He was cremated with full state honours in his village in Punjab today. Thousands attended his funeral including Congress Vice-President Rahul Gandhi and Punjab Chief Minister Parkash Singh Badal, who was accompanied by his entire cabinet.

Pakistan had turned down three appeals from India after Sarabjit Singh was injured to allow him to be treated at home.

"This obvious retaliation to the death of Indian prisoner Sarabjit Singh is condemnable," said a statement from the Pakistan foreign ministry today about the attack on Sanaullah, who was in prison for terrorism.

Promoted
Listen to the latest songs, only on JioSaavn.com
The Ministry of External Affairs in India has suggested that officials from both sides meet to discuss the "ensure the safety, security and humane treatment of Indian and Pakistani prisoners in each other's jails." (Read: India's full statement on attack on Pakistan prisoner Sanaullah)

The Jammu and Kashmir government has ordered an inquiry into the assault on the Pakistani prisoner, Sanaullah, and the jail superintendent has been suspended.