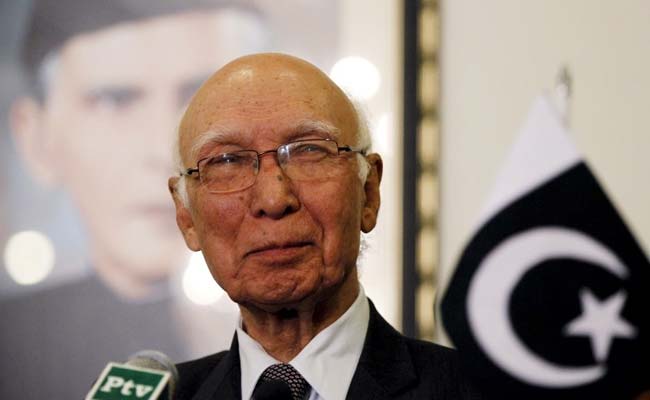 Sartaj Aziz said Pakistan sent a Joint Investigation Team to India and has already initiated the required investigation against those alleged to be involved.

Islamabad: Pakistan today accused India of using the Pathankot terror attack as an "excuse" to derail the bilateral dialogue process and said that talks are the best way forward to resolve outstanding issues, including "mutual concerns" related to terrorism.

He said Pakistan and India had agreed to start the dialogue in December 2015 when Indian Foreign Minister Sushma Swaraj visited Pakistan.

"But before the Foreign Secretaries could meet and finalise a schedule for resuming the Comprehensive Dialogue, the Pathankot incident of 2 January 2016 gave India an excuse to postpone the resumption of the dialogue," he said.

"Pakistan believes that dialogue is the best way forward to resolve outstanding issues, including mutual concerns related to terrorism," he said.

He said Pakistan sent a Joint Investigation Team to India and has already initiated the required investigation against those alleged to be involved.

The India-Pakistan talks were was stalled after the January 2 attack on Pathankot airbase in which seven security personnel were killed.

India has accused Pakistan-based terror group Jaish-e-Mohammed for the attack and has linked the resumption of the dialogue process to the action taken by Pakistan against the group.

To a question, Mr Aziz said that Pakistan would continue to support Kashmiris' struggle for the right of self- determination at bilateral level in talks with India as well as at multilateral forums like the UN.

Mr Aziz reiterated that US drone attack on May 21 which killed Afghan Taliban leader Mullah Mansour damaged the efforts for peace and reconciliation in Afghanistan.

"The recent drone attack in Balochistan in which the Taliban leader Mullah Akhtar Mansour was killed, has breached our sovereignty, caused a serious setback to the peace efforts and intensified hostilities in Afghanistan. The drone strike must, therefore, be condemned by all stakeholders," he said.

He said Pakistan's relations with the US have improved since Mr Sharif took over but the main issue affecting the ties is American indifference towards security needs of Pakistan.

"In our interactions, we firmly conveyed to the US that maintaining effective nuclear deterrence is critical for Pakistan's security and only Pakistan itself can determine how it should respond to the growing strategic and conventional imbalances in South Asia," he said.