Over 5 crore people across the state formed an 18,034-km long human chain to help raise awareness about the "Jal-Jeevan-Hariyali" drive. 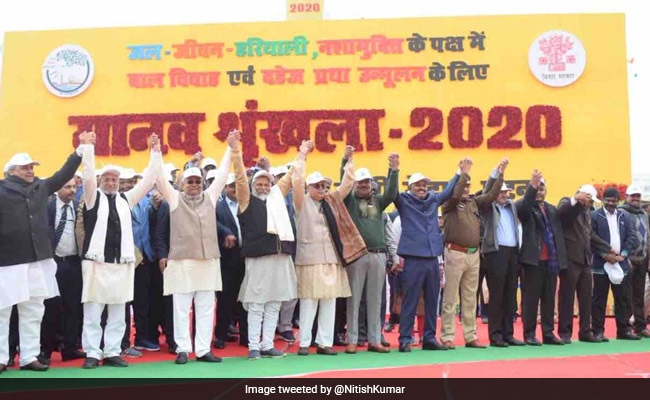 Nitish Kumar with his party leaders at the event in Patna.

Large crowds came out on the streets in Bihar today to show support for Chief Minister Nitish Kumar's environment conservation and social reform measures. Over 5 crore people across the state formed an 18,034-km long human chain - which the government claimed would be the longest one attempted in the state - to help raise awareness about the "Jal-Jeevan-Hariyali" drive and campaigns against dowry, child marriage and consumption of alcohol.

"This human chain will prove to be a milestone in creating awareness about environmental conservation and campaigns for social reforms," Mr Kumar tweeted. He also thanked the people of Bihar for their support to the event.

Opposition parties like the RJD, however, sharply criticized the event, calling it a colossal waste of public money and government resources. "There is so much unemployment in the state. But Nitish Kumar ji has spent crores of rupees to hire helicopters to cover the human chain event. When floods ravaged the state, not even a single helicopter was hired," party leader Tejashwi Yadav was quoted as saying by news agency ANI. "Even children are forced stand outside in the cold without shoes," he added.

Tejashwi Yadav's elder brother Tej Pratap Yadav also hit out at the government over the event. "We would have appreciated had the CM organized a rozgar shrinkhla (employment chain?) for providing jobs to unemployed youth instead of the farcical manav shrinkhla (human chain)," he was quoted as saying by news agency PTI.

Mr Kumar had begun his statewide ''Jal-Jeevan-Hariyali Yatra'' against climate change on December 3. Emphasising the importance of water conservation and afforestation, he undertook a four-day first phase of the tour in the northwestern Bihar, addressed meetings and launched projects. Today's event was held to mark the end of his yatra.