In less than 12 months, 36,433 'Make in India' ventilators have been supplied to all the public health facilities, the Health Ministry said. 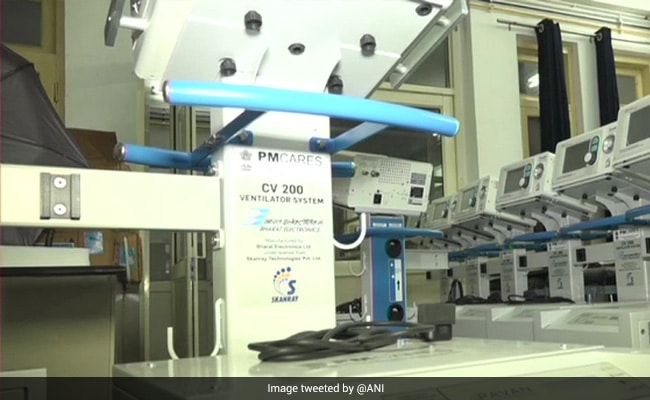 All export restrictions on ventilators have now been removed, the health ministry said.

The Health Ministry said on Thursday that it had ensured delivery of 36,433 ventilators to government hospitals in the country and the average cost now ranges between Rs 2-10 lakh as the domestic industry took up manufacturing of the equipment.

The ministry underlined that all public health facilities in the country had only around 16,000 ventilators from the independence till pre-COVID times.

But in less than 12 months, 36,433 'Make in India' ventilators have been supplied to all the public health facilities, it said in a statement.

All export restrictions on ventilators have now been removed and 'Make in India' ventilators are being exported. The year witnessed tremendous achievements in the medical supplies sector in the country, the ministry said.

"At the beginning of the pandemic, India was almost totally dependent on imported ventilators, PPE kits and N-95 masks," it said. "There were, in fact, no standard specifications for these products which are essential in the fight against the pandemic," it added.

The central government recognised the challenges posed by the pandemic in the very initial stages and successfully ensured more than adequate availability and supplies of essential medical items across the country, according to the ministry.

In the case of personal protective equipment (PPE), India has now become the world's second-largest manufacturer from a miniscule domestic production capacity in March. There is a production capacity of more than 10 lakh PPE coveralls per day and it is also exported to several countries, the ministry said.

There are already nearly 1,700 indigenous manufacturers and suppliers registered on the government e-marketplace, with dozens already certified by the Bureau of Indian Standards.

Nearly 1.7 crore lakh PPE kits have been distributed free of cost to the states, Union territories and central institutions.

"The buffer stock of PPE kits available with the central and state governments has grown from about 2 lakh in March to more than 89 lakh at present. The average price has come down substantially from nearly Rs 600 to about Rs 200 per kit in 9 months," the ministry said.

These are also being exported from India in large quantities. More than 4 crore N-95 masks have so far been distributed free of cost to various states, Union territories and central institutions, it said.

The buffer stock of N-95 masks available with the central and state governments has risen sharply from about 9 lakh in March to about 1.46 crore at present and the average prices have dropped from about Rs 40 to Rs 12 per mask during the same period,the ministry stated.

The government has already placed orders for procurement of nearly 83 crore syringes. Additionally, bids have also been invited for nearly 35 crore syringes. These will be used for COVID-19 vaccination and also for the universal immunisation programme.