Four deaths each were reported in Darbhanga, Gopalganj and Saharsa, 3 each in Khagaria and Sheohar, 2 in Saran and 1 in Muzaffarpur, Special Secretary in the Disaster Management Department Anirudh Kumar said. 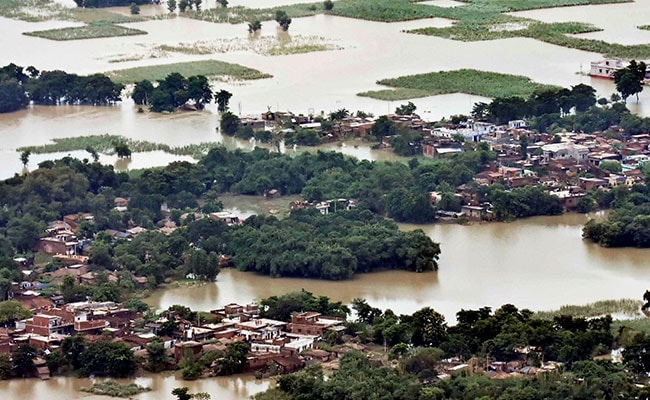 Bihar floods: Around 1.08 crore people have been hit by floods in 17 districts in the state.

New Delhi: The number of deaths in flood in Bihar rose to 153 today while those marooned in 17 districts of the state crossed the one crore mark, even as the Army was called in for relief and rescue operations in deluge-hit eastern Uttar Pradesh districts adjoining Nepal.

The situation, however, eased in Assam and West Bengal, where no heavy rains were reported.

Araria district of Bihar accounted for 30 deaths, West Champaran 23, Sitamarhi 13, Madhubani 8 and Katihar 7. 11 each have died in Kisanganj, East Champaran and Supual and 9 each in Purnea and Madhepura.

Four deaths each were reported in Darbhanga, Gopalganj and Saharsa, 3 each in Khagaria and Sheohar, 2 in Saran and 1 in Muzaffarpur, Special Secretary in the Disaster Management Department Anirudh Kumar said. 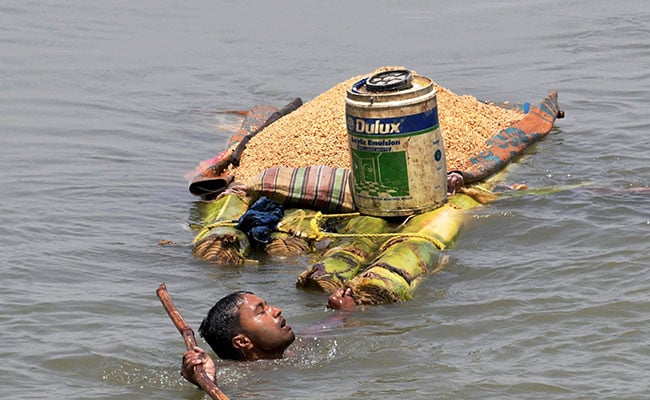 A villager carries grains on a banana raft as he shifts from Araria district of Bihar. (PTI)

Around 1.08 crore people have been hit by floods in 17 districts and 1,688 panchayats of the eastern state, he said. The MeT office said Patna, Gaya, Bhagalpur and Purnea are likely to witness rain or thundershower today.

Bihar Chief Minister Nitish Kumar reviewed the flood situation and gave necessary instruction to officials. He gave orders for intensive airdropping of food packets in Kursakanta, Palasi, Sikti and Jokihaat in Araria and the Sugauli area in East Champaran, an official statement said.

A total of 28 National Disaster Response Force teams comprising 1,152 personnel are rendering services in the marooned areas with the help of 118 boats.

Seven Army teams with 2,228 personnel are assisting relief and rescue operation with the help of 280 boats, a state Disaster Management Department release said.

The Special Secretary in the Disaster Management Department said 1,765 community kitchens are catering to 3.44 lakh people in several flood-hit areas of the state.

Continuous rains and discharge of water in rivers worsened the deluge situation in eastern Uttar Pradesh, where Army had to be called in.

The movement of traffic on the Gorakhpur-Sonauli road towards Nepal came to a standstill with the waters of Rohin river inundating Maniram township and the national highway, sources in the administration said.

As many as 105 villages of the district have been hit by the floods, of which 35 are totally submerged and the villagers have been shifted to safer places, they said. According to a report from Siddhartnagar, army helicopters assisted in extending relief material to the affected. An aerial view of a flood-hit area at Bal Bal in Betiah in West Chaparan, Bihar. (PTI)

The flood situation in north Bengal improved with water levels of all major rivers receding, though the toll rose to 52.

Nearly 15 lakh people have been affected by the floods in Coochbehar, Dakshin Dinajpur, Uttar Dinajpur, Jalpaiguri, Alipurduar and Malda districts in north Bengal since July 21.

Train services to different destinations in north Bengal and Assam from Howrah and Sealdah stations remained suspended on the sixth consecutive day, a railway spokesman said.

Bus services between the southern and northern parts of the state also remain suspended for the last five days owing to inundation of national highway 34 and 31 and state highways at different places in north Bengal. In the north-eastern state of Assam, 11 more persons died in flood-related incidents.

However, officials said the situation has improved in the state as no fresh spell of rainfall was reported.

In Baksa, Barpeta, Bongaigaon, South Salmara, Kamrup and Kokrajhar districts, one person each died due to floods, it said.

The third wave of flood has so far claimed the lives of 60 people across the state. With these, the total number of persons losing their lives in this year's flood-related incidents in Assam went up to 144, including eight in Guwahati.

The ASDMA said 25.93 lakh people have been affected in the state.

As per the report issued today, Morigaon was the worst affected followed by Dhubri in the state. A total of 2,210 villages were under water and 1.23 lakh hectares of crop were inundated and damaged, they said.

Promoted
Listen to the latest songs, only on JioSaavn.com
The authority added that Brahmaputra river was flowing above the danger mark at Nimatighat in Jorhat, Goalpara and Dhubri towns.

The India Meteorological Department (IMD) said Odisha was likely to experience heavy rainfall in next 24 hours due to a low pressure area created over northwest Bay of Bengal and adjoining coastal region of the state.