The cabinet adopted a resolution which said Sushma Swaraj will always be remembered for her exceptional oratorical skills and a compassionate approach and recalled that a US daily had declared her "India''s best-loved politician" in 2017. 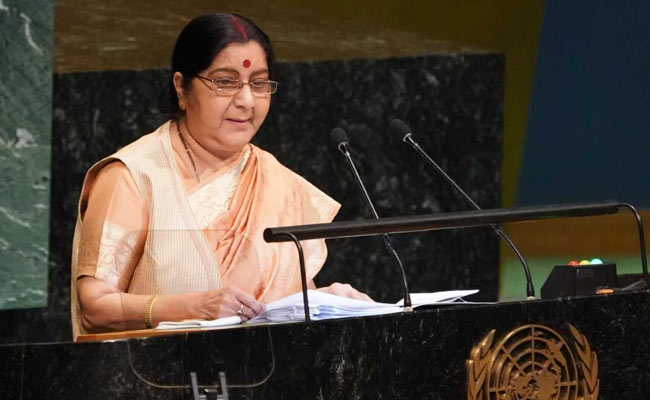 Sushma Swaraj died at 67 due to cardiac arrest at Delhi's AIIMS.

The Union Cabinet met on Tuesday and paid tributes to former union minister Sushma Swaraj saying the country has lost a distinguished leader and an outstanding parliamentarian.

The cabinet adopted a resolution which said she will always be remembered for her exceptional oratorical skills and a compassionate approach and recalled that a US daily had declared her "India''s best-loved politician" in 2017.

The cabinet expressed its profound sorrow at the demise of Sushma Swaraj who passed away at AIIMS on August 6 following a cardiac arrest.

The resolution said she was an able administrator and an affable leader who helped Indians in distress abroad.

"Sushma Swaraj will always be remembered for her exceptional oratorical skills and a compassionate approach. She was an able administrator and an affable person with a humane touch who won the hearts of all by helping Indians in distress abroad. For these qualities, she was declared as "India's best-loved politician" by the US daily ''Wall Street Journal'' in 2017," it said.

"The Cabinet places on record its appreciation of Sushma Swaraj's services to the Nation in different capacities. The Cabinet also extends its heartfelt condolences to the bereaved family on behalf of the Government and the entire nation," it added.

Sushma Swaraj was born on February 14, 1952, at Ambala and pursued law from Punjab University, Chandigarh. She started practice as an advocate in the Supreme Court of India in 1973.

She entered public life at a young age and won election to the Haryana Legislative Assembly at the age of 25 years in 1977 and became Cabinet Minister for Labour and Employment.

She was Haryana's Minister for Education, Food and Civil Supplies from 1987 to 1990.

Sushma Swaraj served as a minister in all the governments headed by Atal Bihari Vajpayee and held various portfolios.

She was External Affairs Minister in the previous BJP-led government.

She was the first woman Chief Minister of Delhi for a brief period in 1998.