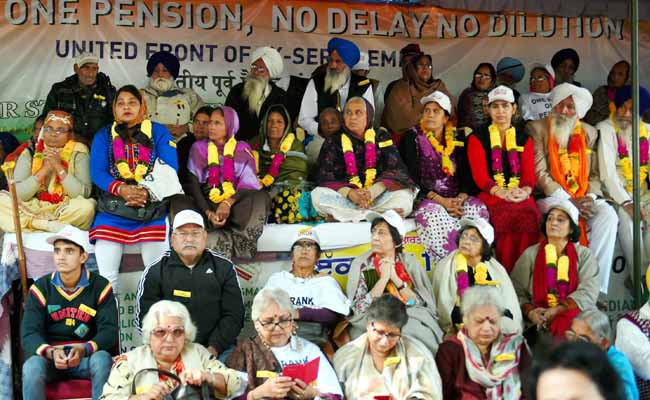 Ex-servicemen with their family members during a protest against the One Rank One Pension scheme announced by the government at Jantar Mantar in New Delhi. (PTI Photo)

New Delhi: Ex-servicemen agitating over 'One Rank, One Pension' (OROP) issue today threatened to intensify the protest if their demands were not met by the Centre within three weeks.

The United Front of Ex-servicemen (UFES), an umbrella body of associations of ex-servicemen which is leading the protest, demanded that the Centre appoints "formally" former Army Chief and Union Minister VK Singh as the mediator between them and the government to resolve the issue "immediately".

"Issue an order today itself empowering VK Singh to mediate with us and discuss the issue with us and resolve it within three-four days by removing seven discrepancies in the government OROP," major general (retd) Satbir Singh, who is leading the protest, said.

Mr Singh made the demand during 'Sainik Aakrosh' rally organised by UFES at Jantar Mantar in Delhi.

Aiming to mount pressure on the NDA government, the UFES urged its members to not vote for the Bharatiya Janata Party (BJP) in the upcoming assembly elections in several including Assam.

The veterans claimed it were the votes of ex-servicemen which helped BJP improve its tally in the 2014 Lok Sabha - more than what the NDA major itself had expected, they claimed.

However, the government has "cheated" veterans by not giving the OROP they wanted and BJP had promised to give, Mr Singh said.

"You saw what happened to the party in Delhi and recently Bihar. We urge the members to not vote for it in upcoming polls now if our demands are ignored," he added.

The UFES also called upon ex-servicemen present at the rally to boycott Republic Day celebrations this year.

Major general (retd) Singh also hit out at Union Finance Minister Arun Jaitley for stating that the government's OROP formula was accepted by most of the ex-servicemen's organisations and that only a small section had some issues with it.

"He (Jaitley) should come here and see the number of people who have turned up here," Mr Singh said, pointing towards the gathering.

"The number would be even bigger had our other colleagues reached here in time. Jaitley claims their OROP is acceptable to most of us, it is a lie. More than 99.99 per cent of us are against it," he claimed.

Mr Singh also challenged Prime Minister Narendra Modi, Mr Jaitley and Defence Minister Manohar Parrikar to face a debate with UFES on the issue and added that the ex-servicemen will call of the movement if proved wrong.

Mr Singh also announced the UFES rejected 7th pay commission report, saying it is over and above OROP.

The rally was also addressed by Colonel Inderjit Singh, who is considered to have begun the fight for OROP. He urged the ex-servicemen to stay "united" for their rights.

The government came out with a notification on OROP on November 7 but the veterans are still unsatisfied. They have demanded that OROP should be implemented from April 1, 2014 and not July 1, 2015 as in the government notification.

OROP principle is in perpetuity and cannot be fiddled with, they maintain.