Organisers arrested for cheating after Metallica concert is cancelled in Delhi 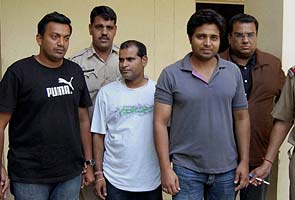 Gurgaon: Four people, including a senior executive of the event management company that has organised the Metallica concerts in India, have been arrested after the rock show scheduled for Friday evening in Gurgaon was cancelled.

The Gurgaon police said the operational head of DNA Entertainment Network for Metallica concerts, Rajesh Chandwani, was among the four people arrested on charges of cheating people and breach of trust. The other three were his team members - Umesh, Ashok Singh and Savio Faleio. The police said they had received several complaints after the show was cancelled. They allege that the organisers sold more tickets than capacity and that they were never informed before the cancellation was announced. The organisers had cited "technical reasons" for scrapping Friday's gig.

Over 25,000 people had gathered at the Leisure Valley Park in Gurgaon's Sector 29 to watch the concert. Less than two hours before the heavy metal band was to play, the organisers postponed the concert to 4 pm on Saturday. Then, after some angry fans trashed equipment, came reports that the Delhi gig had been cancelled altogether.

In a statement released on their site, Metallica cited fans' safety as the reason for the postponement of the Friday's show and permit issues for its subsequent cancellation. "Once we, along with DNA, the promoters of the show, determined that there was a failure of a security barricade in front of the stage that could not be adequately repaired, the promoter reluctantly announced the postponement of the show until Saturday. Unfortunately, on such short notice the promoters were unable to secure a permit for a show on Saturday. Therefore, DNA announced that we would not be able to play in Delhi," the statement read. (Read Metallica's full statement on why the Delhi show was cancelled)

The organisers have said all ticket holders will be refunded. They say full-page advertisements on refunds will be put out in the next 24 hours explaining all the details.

At the venue on Friday, fans received the news with anger, partly because the announcement made also said that at that time, the band was addressing a press conference at their hotel. (Buzz on Twitter)

Crowds started lining up at about 3 on Friday afternoon - a video on YouTube showed fans running in when the gates opened. (Watch)

During the next three hours, several announcements were made requesting people to move back because the barrier in front of the stage was giving way. The crowd got increasingly more restive with every such announcement, objecting and booing.

After the announcement that the concert had been cancelled, some angry fans near the stage damaged equipment; some tried to set fire to banners near the stage. Others hurled plastic 10-litre bottles of water onto the stage. But a majority of the thousands gathered, though vocally disappointed, stayed calm and largely orderly as they exited through small rickety gates.

A young fan named Karan said, "I am very disappointed that the concert has been cancelled. I came all the way from Mumbai to see the concert. I have been standing for almost two hours now and have just been told that it has been postponed. No organiser has made any official statement if our tickets will be reimbursed or not."

"I'm glad my sons got out from the #Metallica madness unscathed. Why can't we organise an event without drama?" tweeted Jammu and Kashmir Chief Minister Omar Abdullah.

Earlier on Friday in an interview to NDTV, the members of the heavy metal band said they were looking forward to playing for a massive audience. They also said they were keen to see the Taj Mahal.

The police chief in Gurgaon said yesterday that the concert had been called off. "The organisers have to say why they cancelled (the show). They have to explain. They have cancelled it without taking the district administration into confidence," said Police Commissioner S.S. Deshwal. He said that fortunately, the crowd dispersed peacefully.

Promoted
Listen to the latest songs, only on JioSaavn.com
The concert was organised by DNA Entertainment Network; 25,000 thousand tickets had been sold for prices ranging from Rs. 1650 to Rs. 2750.

Metallica is scheduled to perform in Bangalore on Sunday.