External Affairs Minister Sushma Swaraj said that everybody present at the meet was unanimous in the view that the air strike was a justifiable response to the death of 40 CRPF personnel in the Pulwama terror attack on February 14. 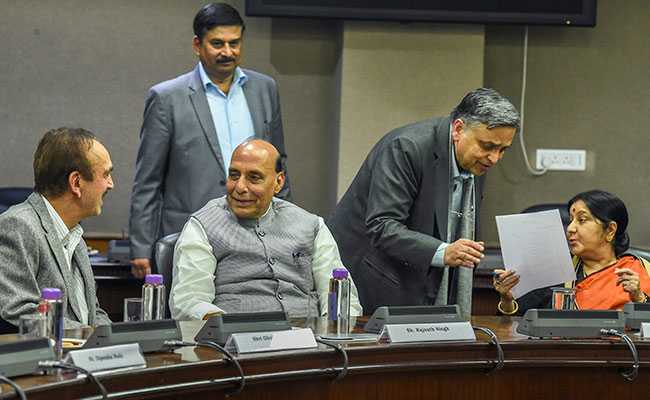 Sushma Swaraj said all parties are unanimous in their support for the air strike.

Politicians cutting across ideological lines praised the Indian Air Force at an all-party meeting held hours after its fighter planes hit terror camps in Pakistan's Balakot early this morning, but maintained that the operation should not be used to fan "jingoistic" sentiments that could spur further attacks on Kashmiris.

External Affairs Minister Sushma Swaraj said that everybody present at the meet was unanimous in the view that the air strike  -- which had 12 Mirage 2000 fighter jets dropping six bombs on the biggest Jaish-e-Mohammed terror camp in Balakot -- was a justified response to the death of 40 CRPF personnel in the Pulwama terror attack on February 14. "I am happy that all party representatives congratulated the Indian Air Force, demonstrating a mobilisation cutting across party lines," news agency ANI quoted External Affairs Minister Sushma Swaraj as saying after the meet.

The government, however, did not confirm that 300 terrorists were killed in the air strike.

Senior Congress leader Ghulam Nabi Azad expressed his party's approval of the air force action. "We have appreciated the efforts of our defence forces, and they will always have our support for ending terrorism. It was a clean operation that targeted only terrorists and terror camps," he told mediapersons.

During the meet, the opposition also sought increased alertness at a time when Pakistan has termed the air strike as an "uncalled for" act of aggression, and warned of retaliation at a time and place of its choosing. Party leaders also called for government action to "win back" the confidence of Kashmiris, and asked it to refrain from mouthing the "divisive rhetoric" on Article 370 and 35A (two key provisions that give special powers to residents of the state).

A senior opposition leader later told NDTV that Rajnath Singh promised protection for Kashmiri students, and said that an advisory issued by the Ministry of Home Affairs in this regard was still in force.

According to sources, Ms Swaraj also informed opposition leaders about a conversation she had with United States Secretary of State Michael Pompeo after the strike. She plans to discuss the issue with Russian and Chinese ministers on Wednesday.