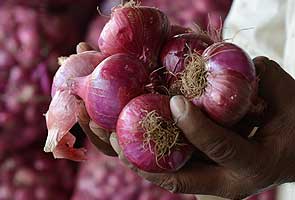 Sources said, the meeting will focus on ways to improve onion supplies and control prices in the national capital.

Onion prices in the national capital have remained high since last three months on supply crunch due to unseasonal rains in producing areas. Retail prices have gone up to Rs 90 per kg now.

Mr Pawar and Thomas are also expected to meet separately on this issue today. It is likely that finance and commerce ministers might join the meeting to finalise measures to ward off rising onion inflation, sources said.

Yesterday Mr Pawar had indicated that onion prices might remain high for a few weeks, and asked states to crack down on hoarders to help tame the rates.

Mr Pawar also said he would inform Mr Thomas that the National Agricultural Cooperative Marketing Federation of India Limited (NAFED) is ready to import some quantity.

Onion is a politically sensitive commodity in the country. In 1998, the BJP government was voted out of power in Delhi due to increase in onion prices to Rs 60 per kg.

Mrs Dikshit had come to power riding on public anger over onion price. Ironically, she is facing similar challenge ahead of state elections to be held on December 4.

Promoted
Listen to the latest songs, only on JioSaavn.com
In August, Dikshit had met Pawar and urged him to take immediate steps to control prices. However, since then, the price situation has rather worsened.