"The Supreme Court has been very clear that we cannot stop the operations to retrieve the bodies. We are going to appeal in the Supreme Court," Conrad K Sangma told PTI. 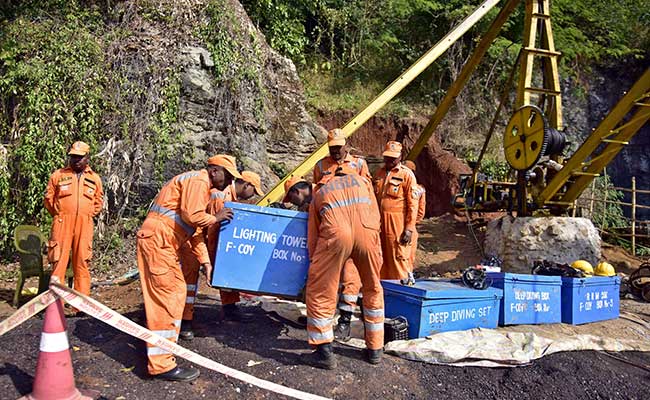 The "rat-hole" mine is in a remote part of East Jaintia Hills district. (File)

Around four months after 16 people were trapped in an illegal coal mine in Meghalaya, Chief Minister Conrad K Sangma on Wednesday said the state government will appeal to the Supreme Court to stop the operations to retrieve the bodies.

On January 28, the Supreme Court had asked the Centre and the Meghalaya government to continue their multi-agency operations to rescue the miners.

"The Supreme Court has been very clear that we cannot stop the operations to retrieve the bodies. We are going to appeal in the Supreme Court," Mr Conrad told PTI.

Multiple agencies are on the job to retrieve bodies of the miners trapped in the flooded mine, located at Ksan near Lytein river in East Jaintia Hills, since December 13 last.

During the operations, only two highly decomposed bodies of the 16 trapped miners were pulled out by the Navy's remotely operated vehicle on January 16 and February 28.

Though the outcome of the operations is not "as expected", rescue agencies are working "day and night" to ensure that more bodies are found, the chief minister said.

Mr Conrad had earlier informed the Assembly that Rs 2.5 crore had been spent on the operation which began on December 13, the day 16 of the 22 miners, who went down the illegal mine were stuck when water gushed in from the Lytein river.

Dewatering exercise has been continuing from 10 to 15 abandoned coal mine shafts to help reduce the water level at the rat-hole coal mine.

The Army, the NDRF, some leading companies and the local administration are involved in the exercise.