Read inOther Languages
This Article is From Jan 26, 2020

"Dear PM, The Constitution is reaching you soon. When you get time off from dividing the country, please do read it. Regards, Congress," the party tweeted along with the snapshot of an Amazon. 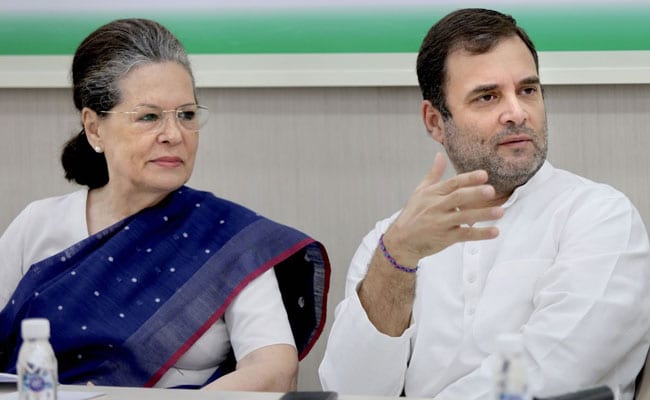 Sonia Gandhi, Rahul Gandhi and other leaders read the Preamble at a protest recently. (File)

On the 71st anniversary of the adoption of the Constitution, the Congress sent a copy of the book to Prime Minister Narendra Modi, saying, "When you get time off from dividing the country, please do read it". The dig encapsulated the opposition's allegations of the government violating the Constitution through the Citizenship Amendment Act or CAA. Most of the politicians, civil society and artistes who are opposing the CAA, read the Constitution on Republic Day.

"Dear PM, The Constitution is reaching you soon. When you get time off from dividing the country, please do read it. Regards, Congress," the party tweeted along with the snapshot of an Amazon receipt, which indicated that the copy would be delivered to the Central Secretariat.

The Constitution is reaching you soon. When you get time off from dividing the country, please do read it.

The party also tweeted the BJP with passages from the Constitution to explain its argument on the CAA:

A lesson the BJP has failed to understand is that all persons no matter creed, caste or gender are guaranteed equality before the law under Article 14 of the Constitution. It is this article that is completely violated by the govt's Citizenship Amendment Act. #RepublicDaypic.twitter.com/54k31I4DZy

It is important to remember that it is enshrined in our Constitution that all persons are protected from discrimination of any form. Therefore, any attempt to draft laws based on discrimination are unconstitutional. #RepublicDaypic.twitter.com/njlDcorfeI

The violent clampdown on peaceful protests, the systematic breakdown & manipulation of the media & the undemocratic arrest or detention of persons criticising the govt are all symptomatic of BJP's unconstitutional behaviour. #RepublicDaypic.twitter.com/bxq7TWFuOJ

Elsewhere, other opposition leaders tried to drive home the message.

In Bengal, Chief Minister Mamata Banerjee urged people to take a pledge to protect the Constitution and uphold its principles.

"On #RepublicDay, let us pledge to protect our #Constitution and uphold the principles
of sovereign, socialist, secular, democratic, republic, justice, liberty, equality and fraternity, as enshrined in the Preamble," her tweet read.

Asaduddin Owaisi, the chief of the All India Majlis-e-Ittehadul Muslimeen,  hoisted the tricolour and read the Preamble of the Constitution in the old city of Hyderabad.

In Kerala, the ruling CPI(M) led Left Democratic Front formed a 620-km human chain from the northern to the southern part of the state, demanding withdrawal of the CAA.

Both Rahul Gandhi and Priyanka Gandhi extended their greetings to the people on the occasion of the Republic Day.

In a message on the eve of the Republic Day, Sonia Gandhi asked people to rise above personal prejudices and stand united to protect the Constitution.

"A deep-rooted conspiracy has been hatched to set a discourse to divide countrymen based on religion, regionalism and language as also to subvert and undermine the Constitution. An unprecedented atmosphere of disturbance, fear and insecurity has been foisted upon the country," she was quoted as saying by news agency Press Trust of India.