"Do What's Right For Nation": Robert Vadra On Priyanka Gandhi's UP Visit 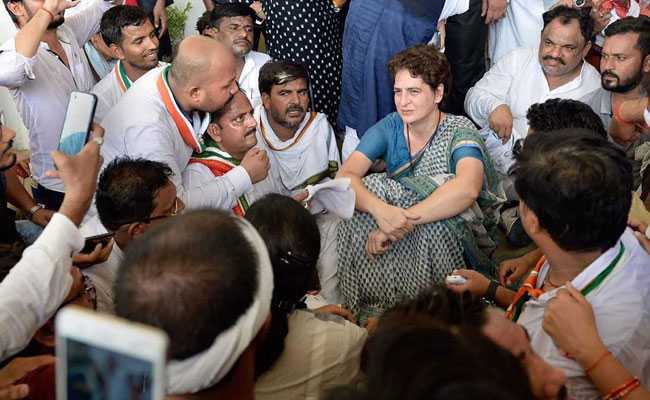 Businessman Robert Vadra today said he has always respected the "qualities of compassion, empathy and sincerity" in her wife Priyanka Gandhi, who was detained for over 24 hours in Uttar Pradesh after she was stopped on Friday from meeting those affected by Sonbhadra shootout. She was released from detention this afternoon.

In a message to his wife on Twitter, shared along with a video of Priyanka Gandhi meeting the families affected by the shootout, Robert Vadra said: "Priyanka,do what is right for the nation."

"Today,Priyanka,I respect u more for standing up against atrocities on villagers. U were there to console them,when govt refused to listen to wails of the families," Mr Vadra tweeted this afternoon.

I have always respected your qualities of compassion,empathy & sincerity. Today,Priyanka,I respect u more for standing up against atrocities on villagers. U were there to console them,when govt refused to listen to wails of the families.Priyanka,do what is right for the nation.???? pic.twitter.com/aKHrsIccav

On Friday, Ms Gandhi was stopped on her way to Sonbhadra, where 10 people were killed in a shootout earlier this week. She was taken to a guesthouse in Mirzapur.

In a late-night meeting with the government officials, she said she "won't leave without meeting the affected families". After a 24-hour long detention, Priyanka Gandhi today met the families at the Mirzapur guesthouse.

An official in Uttar Pradesh this afternoon said the Congress leader is "free to go anywhere".

Congress will compensate the families affected by the shootout with Rs. 10 lakh each, Ms Gandhi told reporters today. Taking a dig at the state government, she said, "The responsibility for the Sonbhadra massacre is with the Yogi government and not with Nehru."

Earlier this week, 10 people were killed and over 24 injured in a village in Sonbhadra when a village chief, Yagya Dutt, and his associates, fired on a group of tribal farmers over a land dispute.