The letters were hand delivered to India's Ambassador to the US Taranjit Singh Sandhu by Brian P McKeon, Deputy Secretary of State for Management and Resources, who attended an Independence Day reception hosted at the India House on Monday. 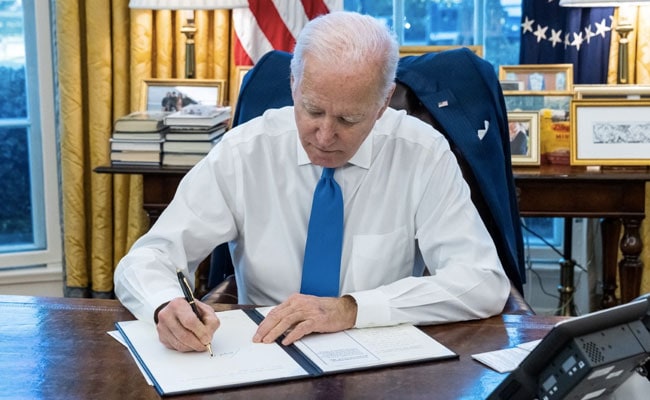 The letters were hand delivered to India's Ambassador to the US Taranjit Singh Sandhu by Brian P McKeon, Deputy Secretary of State for Management and Resources, who attended an Independence Day reception hosted at the India House on Monday.

"I should say at the outset, when I got here, I gave the ambassador two letters from the President, one to Prime Minister Modi and one to President Murmu. I should have kept them and just read the letters because they're probably more eloquent than what I'm gonna to say here," Mr McKeon said in his remarks at the reception.

There are a few partnerships more vital, more consequential than the one between the United States and India, he said.

"Starting from this day as a senator from Delaware, President Biden has long championed this partnership," he said.

"I should know I worked for him for 20 years in the Senate and was there working alongside him. In 2006, as the Senate was taking the vote on the US and India civil nuclear agreement, he said if I were asked to name the pillars of security in this 21st century, India and the United States would be two of them," he said.

"His vision for what we can achieve has now been realised as we work together across every area of human endeavor, utilising our respective areas of expertise to address the most difficult challenges from the fight against COVID to addressing climate change to securing global supply chains and food supply," he said.

Mr Mckeon said Joe Biden and PM Modi met in April and reaffirmed the countries' commitment to work together for a more prosperous, free, connected and secure world.

"In just the last few months, we have concluded a new investment incentive agreement that will allow us to expand investment in clean energy. sustainable infrastructure and resilient supply chains.

The United States, he said, welcomes India's decision to join the Indo-Pacific economic framework. India is also a crucial partner in the Quad, he said.

"Together we work to promote a free and open Indo-Pacific and address the challenges we face around the world," Mr McKeon said.

"As we look back 75 years and reflect on this historic occasion, we are reminded how important it is to defend the democracies and freedoms both our people have longed for and struggled to achieve. It's the task of every generation to protect and defend democracy and both of our countries," said the American diplomat.

Mr McKeon said the US has remained committed to the bilateral relationship with India since 1947.

"President Truman said in his message to Prime Minister Nehru in the years to come, the people of this great new nation will find the United States a constant friend. I earnestly hope that our friendship will in the future as in the past continue to be expressed in close and fruitful cooperation in international undertakings and in cordiality in our relations, one with the other. That's a pretty good summary," he said.

"We celebrate not only the momentous day in India's history, but also the democratic values that underpin our relationship, which has evolved into a strategic partnership that contributes to a better future for the people of our two countries. There are a few partnerships more vital, more consequential than the one between the United States and India," Mr McKeon said.