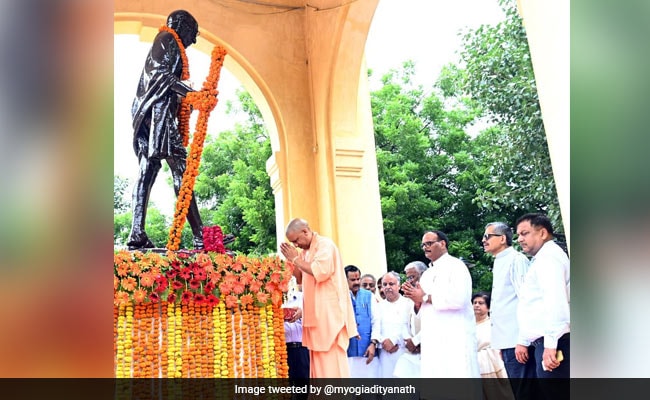 Uttar Pradesh Chief Minister Yogi Adityanath on Wednesday paid tribute to Mahatma Gandhi on his 150th birth anniversary and urged people to follow the path shown by him to become better citizens. "My greetings to everyone on Mahatma Gandhi's 150th birth anniversary. I hope that we will all get inspired by the examples set by the father of the nation to contribute in a better manner to the society and the nation," Mr Adityanath said at a Gandhi Jayanti celebration event in Lucknow.

"Gandhi Jayanti is being celebrated in 120 countries. The world is remembering how a Mahatma wearing a dhoti and with a lathi in his hand was able to drive away the British from India," the chief minister said.

Talking about the ban on single use plastic, the chief minister said, "People do not realise the plastic they throw away not only makes our surroundings dirty and harm the environment but also affects our health when it is used to carry food items. It is also a big threat to the livestock as cows often ingest plastic with the food which is offered to them."

At the event, the Uttar Pradesh Chief Minister also praised the Swacch Bharat Mission which was launched five years ago and added that all activities undertaken during the mission were appreciated worldwide.

"Narendra Modiji had launched the nationwide Swacch Bharat Mission on October 2, 2014, and it has become a mass movement in the past five years. More than 10 crore toilets have been built in the country in the past 5 years, with 2.6 crore of them being constructed for the poor in Uttar Pradesh alone. It is being appreciated worldwide," he said.