On Camera, Man Takes Bath In Pothole To Protest Against Poor Roads In Kerala

The man has been identified as Hamza Porali. The incident reportedly took place on Sunday morning in Malappuram district, Kerala. 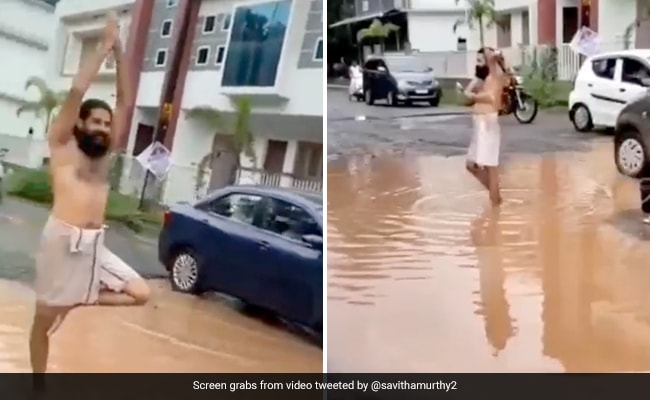 A man in Kerala recently staged a unique protest to draw the attention of authorities toward the growing menace of potholes on the roads.

A video of the entire demonstration has surfaced online. In the clip, the man, set out with a bucket, mug, soap and a bath towel, is seen bathing in a ditch filled with rainwater. He was also filmed washing his clothes in the muddy water pool on the road while curious motorists passed by.

A different way to protest for potholes... pic.twitter.com/tZGqKWUDpi

In the clip, local MLA UA Latheef is also seen reaching the spot where Mr Porali is staging his unique protest. As the MLA's car approaches, the man is seen sitting in a meditating pose in the pothole. He was also recorded doing a yoga pose, again standing in the middle of a huge pothole of mud water, before the MLA.

The video surfaced online days after a man lost his life due to a pothole in Kerala. The 52-year-old scooter rider fell on the road due to a pothole on the National Highway at Nedumbassery in Ernakulam district and was run over by a truck.

Taking cognisance of the case, the Kerala High Court asked the National Highway Authority of India (NHAI) to fill the potholes immediately. The single bench of Justice Devan Ramachandran ruled that the District Collectors, in their capacity as the heads of the District Disaster Management Authorities, will issue orders with respect to any road in which potholes are found, and take necessary action against the jurisdictional Engineer, contractors or any other person who may be responsible.