On Camera, Farmer Leader Slaps Man: "Those With Ill Intent Should Leave"

Farmers' protest: The centre has extended the deployment period of four companies of the Rapid Action Force (RAF) till February 4 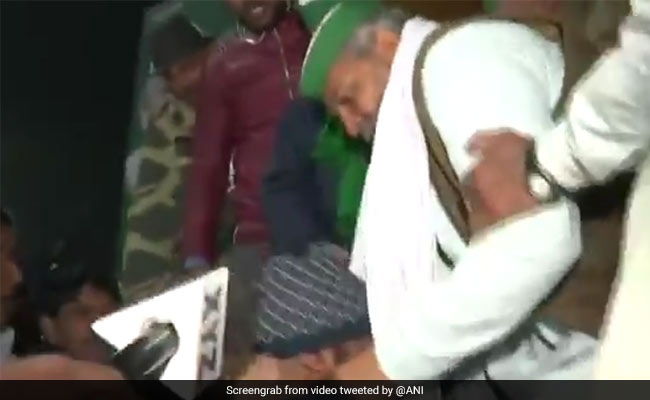 Bharatiya Kisan Union spokesperson Rakesh Tikait slapped a man at the Ghazipur border where farmers are protesting against the new farm laws. "He is not a member of our organisation. He was taking a stick and would have done something. He was misbehaving with the media. All those who are here with ill intent should leave," said Mr Tikait.

The centre has extended the deployment period of four companies of the Rapid Action Force (RAF) till February 4 to maintain law and order in Ghaziabad due to the farmers' protest.

Their deployment was till January 28, but has been extended as the sit-in protest at Ghazipur border continues.

A notice has been served to the farmers at Ghazipur border by the Ghaziabad administration to vacate the protest site.

Earlier, Delhi Police issued a notice to Mr Tikait asking him to explain why legal action should not be taken against him for breaching the agreement with the police on the tractor rally on January 26.

"You are also directed to provide names of the perpetrators of such violent acts belonging to your organisation. You are directed to submit your response within three days," the police notice said.

Nineteen people have been arrested so far and over 25 criminal cases have been filed by the Delhi Police over the violence that broke out during the tractor rally on Tuesday.

A total of 22 First Information Reports have been filed by the police, with one of them mentioning an accident at central Delhi's ITO where a farmer died after his tractor overturned.