They said such a mass leader who had such an immense respect for every religion is rare and wanted to pay their gratitude to him -- posthumously though. 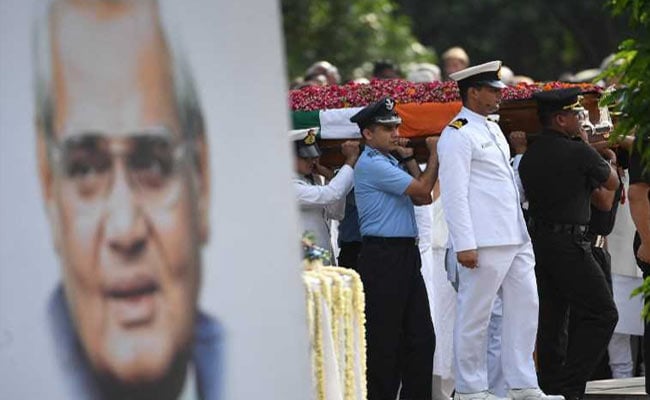 Atal Bihari Vajpayee passed away at AIIMS on Thursday evening.

As Atal Bihari Vajpayee's funeral procession wound its way through Bahadur Shah Zafar Marg, a man wearing a skull cap and sporting a flowing beard, led a group of madrassa students chanting in praise of the departed leader as a mark of gratitude for the former Prime Minister who once helped him settle a dispute over a mosque.

The students from a nearby Muslim seminary said they had been waiting near a busy crossing close to ITO since early morning on a sultry Friday.

"These children got ready in the morning. They have been waiting since then to get a glimpse of Vajpayee-ji. They said when his funeral procession will pass through the road, they would salute him. He was a man of truth. And such men live forever," Ameen-ud-Din told IANS.

Ameen-ud-Din is a member of the management of Madrassa Rasheedia, run by Masjid Bhoori Bhatiyari at Bahadur Shah Marg in central Delhi.

"For a man who stood behind each one of us, we have only this to say that ''Jab tak sooraj chaand rahega....Atalji ka naam rahega''.

Ameen-ud-Din said he had always remembered Mr Vajpayee as a leader "who took people of every religion along, a genuine human being".

"We respect him for that. We would want to thank him from the bottom of our hearts."

Ameen-ud-Din then narrated a story of how he had personally see Vajpayee''s large-heartedness and inclusiveness when he was the Prime Minister.

"He called us to his residence on the issue of a mosque. He treated us with respect. Our Hindu brothers were also present (in the meeting).

"He called up the Home Minister (L.K. Advani) and informed him about the matter. He also assured us that the mosque which was shut would be re-opened.

''You don''t worry. This is Hindustan''," Ameen-ud-Din, recalled Mr Vajpayee''s words of reassurance to him.

He said he had shared the anecdote with the children of the madrassa and when the news of Mr Vajpayee''s death broke, they felt very sad.

They said such a mass leader who had such an immense respect for every religion is rare and wanted to pay their gratitude to him -- posthumously though.

Mr Vajpayee, who passed away at AIIMS on Thursday evening, had a pan-India appeal and is remembered for his six-year rule as the head of the right-wing BJP government.

The country observed a seven-day state mourning as a mark of respect for the leader was decorated with Bharat Ratna and was very popular. The tricolour is flying half-staff.