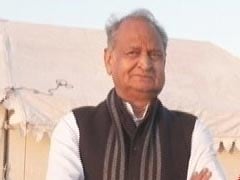 The issue surrounding the resignation of over 80 ruling Congress MLAs from the Assembly reached the Rajasthan High Court on Thursday, with the BJP filing a petition seeking the court's intervention in the same.

In his petition before the high court on Thursday, the state's deputy leader of Opposition in the Assembly, Rajendra Rathore, demanded that the HC direct the Assembly Speaker to arrive at a 'decision' on the mass resignations on September 25, at the earliest.

Amid speculations of the Congress high-command installing former Union minister Sachin Pilot as Rajasthan chief minister in place of Ashok Gehlot, who was believed to the frontrunner for the post of Congress national president, over 80 Congress legislators, considered to be Gehlot loyalists, tendered their resignations in protest.

The resignations took the high-command by surprise weeks ahead of the polls to elect the first non-Gandhi Congress national president in more than decades.

The resignations came on a day the Congress' former Rajasthan in-charge, Ajay Maken, had convened a meeting of MLAs to reportedly install Pilot as the next CM. With the Gehlot loyalists not showing up, the meeting had to be cancelled.

Even as Gehlot later pulled out of the polls to elect the next Congress chief, Maken stepped down as the party's Rajasthan in-charge voicing his dspleasure over the sequence of events.

With Congress' bid to install Pilot as CM thwarted, Gehlot remained chief minister. However, his loyalist MLAs did not take back their resignations from the Assembly.

Speaking to reporters before filing his plea on Thursday, Rathore said, "The Speaker hasn't yet taken a decision on the resignation of over 80 Congress MLAs from the Rajasthan Assembly."

With matter now in court, the state could be headed for a fresh political crisis ahead of the Assembly elections next year.

CM Gehlot and his former deputy Pilot have had several run-ins in the recent past. After a rebelion engineered by Pilot previously was thwarted, the Rajasthan CM had gone on record to call him 'nakara' and nikamma' (useless).

And in the most recent instance, Gehlot labelled Pilot a 'traitor' during an interview to a private televisoon news channel, adding that he will be the chief minister of Rajasthan.

Pilot had hit back at the Rajasthan CM, calling his allegations 'baseless'.