Omar Abdullah, quoting a news story with a picture of Hema Malini standing with a broom, asked: "But the Parliament complex is one of the cleanest places in the country, especially when the sessions are on, so what were they sweeping". 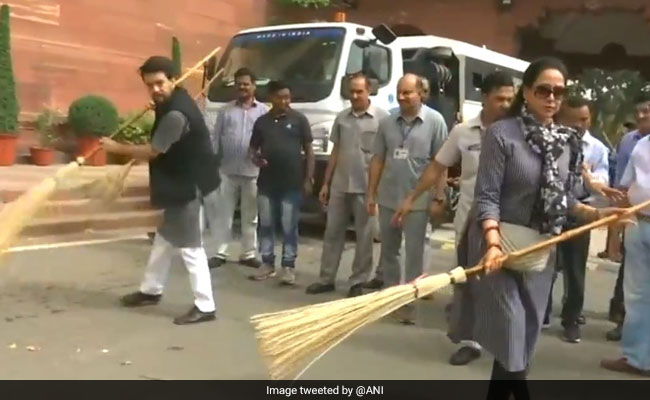 Hema Malini was seen sweeping the area outside parliament as part of a cleaniliness drive.

Omar Abdullah, in a series of tweets, once again mocked BJP leader Hema Malini who was seen sweeping the premises outside Parliament as part of a cleanliness drive on Saturday. The "Swachh Bharat Abhiyan" was organised by the Lok Sabha Speaker; BJP lawmaker from Mathura Hema Malini and Minister of State Anurag Thakur, both surrounded by their security detail, were seen sweeping the area.

Mr Abdullah, quoting a news story with a picture of Hema Malini standing with a broom, asked: "But the Parliament complex is one of the cleanest places in the country, especially when the sessions are on, so what were they sweeping".

The former Jammu and Kashmir chief minister targeted Hema Malini in another tweet, after she said she would carry out a similar drive in her own constituency next week. "Ma'am please practice how to wield the (broom) in private before your next photo op. This technique you've employed won't contribute much to improving cleanliness in Mathura (or anywhere else for that matter)," he said.

I knew sweeping the dormitories in Sanawar would be useful for something. I'm now qualified to comment on the 🧹 technique of others 😄

The actor-turned-BJP lawmaker, in April, was seen on a tractor in her constituency, Mathura. On the tractor, Mr Abdullah noticed two machines on either side, which, he commented, appeared to be blowers to keep Ms Malini cool.

"What are those drums on the side? Please don't tell me those are mist generators for cool air? Wow, that's one fancy tractor," said the National Conference leader.

In photos from her Lok Sabha campaign earlier this year, Hema Malini was seen cutting crop with women on fields and greeting people through the sunroof of her Mercedes. Rival parties had accused her of putting up an act in poll season.

Several others on social media too mocked her for sweeping a largely clean Parliament complex with many calling it a "photo-op".

When new entrants at Hogwarts are introduced to the broomstick for the first time https://t.co/7BZpx3LwmW

"It is highly appreciable that the Speaker of the House took initiative to carry out 'Swachh Bharat Abhiyan' on the 150th birth anniversary of Mahatma Gandhi, in Parliament premises. I will go back to Mathura next week and carry out this Abhiyan there as well," Hema Malini was quoted as saying by news agency ANI.