Omar Abdullah sat on a 'dharna' on the national highway with his supporters demanding immediate withdrawal ban on civilian traffic imposed by the Governor administration. 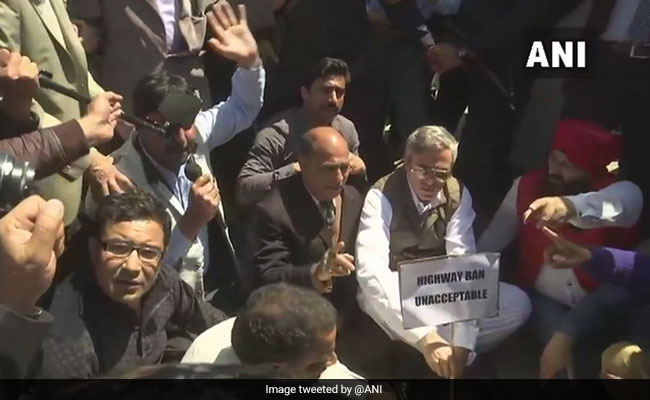 Omar Abdullah sat on the 'dharna' on the national highway in Nowgam on the outskirts of Srinagar.

Mr Abdullah sat on a dharna on the highway with his supporters, demanding immediate withdrawal of the ban on civilian traffic imposed by the state administration.

Peoples Democratic Party chief Mehbooba Mufti also protested against the ban, and reiterated her call to call off the restricted movement for civilians.

The state government imposed the ban on civilian traffic for two days a week for smooth movement of security force convoys. The ban came into effect on April 7. It was imposed to prevent any attack similar to the suicide bombing on Jammu-Srinagar highway in February that killed 40 CRPF soldiers.

The authorities have said the ban will not apply to medical emergencies, movement of lawyers, doctors, tourists, government employees, school buses and agriculturalists.

Local traders dealing in perishable items like vegetables and meat, among others, argue that their goods perish on storage as they are unable to carry on normal business on Sunday and Wednesday at markets near the highway.