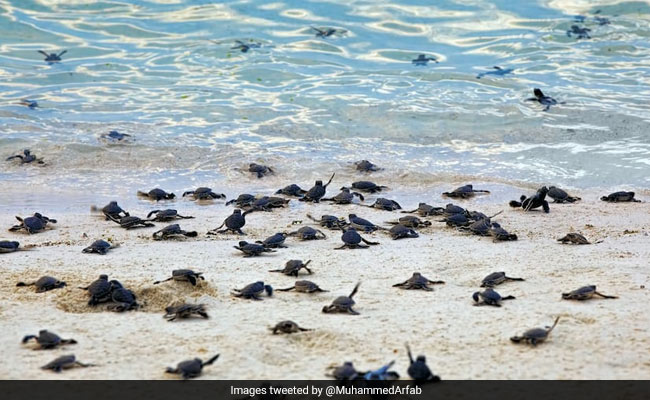 The babies have emerged from 2.98 lakh nests dug by female turtles to lay eggs (Representational)

A total of 1.48 crore baby turtles of the endangered Olive Ridley species have emerged out of the eggshells at the Gahirmatha beach in Odisha's Kendrapara district, officials said on Saturday.

"A total of 1.48 crore of baby turtles have broken out of eggshells to mingle in the Gahirmatha seawaters till Thursday, marking the grand culmination of the annual sojourn of Olive Ridley sea turtles to this unmanned Gahirmatha Island," said Bikash Ranjan Dash, the Divisional Forest Officer of Bhitarkanika Mangrove (Wildlife).

The birth of the turtles began on April 25 and the annual event has now reached its fag-end, he said.

"The babies have emerged from 2.98 lakh nests dug by female turtles to lay eggs at the Nasi-ii Island, close to defence installation at the Wheelers'' Island, Mr Dash said, adding that round-the-clock vigil is being maintained to ensure the safety of the newborns.

After emerging from the nests, the baby turtles loiter on the beach for an hour or so before starting their journey towards the sea, he said.

Gahirmatha beach is widely regarded as the world's largest nesting ground for these endangered species, and this year, 3.49 lakh female turtles had turned up for mass nesting, a phenomenon called "arribada".

As the nests were not damaged and remained mostly intact, hatchlings were on the higher side, the official said.

Each female lays around 100 to 120 eggs. Hatchlings emerge out of the eggshells after 45-50 days of the incubation period, he said.