Two of the injured are critical and have been shifted to SCB Medical College & Hospital in Cuttack, said LD Sahu, director of Capital Hospital, where the rest are being treated. 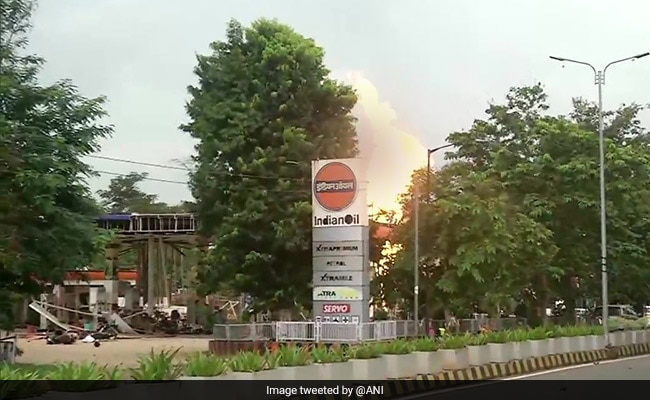 The cause of the blaze is yet to be ascertained, police said.

Nine people were injured, two of them critically, in a major fire that broke out at an Indian Oil Corporation petrol pump near the Raj Bhavan in Bhubaneswar on Wednesday, police said.

The explosion caused by the fire was so loud that it caused people to rush out of the nearby buildings fearing that there was an earthquake.

Police said some nearby shops and houses suffered damages due to the blast.

Under the impact of the explosion several vehicles which were near the site at the time were found to have been thrown away, eye witnesses said.

The petrol pump itself was damaged in the fire, whose cause is yet to be ascertained.

The IOCL evacuated the fuel in two tanks of the petrol pump.

Senior officers of IOCL and the police rushed to the spot and the roads in the area were closed, officials said.

The critically injured have been shifted to SCB Medical College and Hospital in Cuttack, said LD Sahu, director of Capital Hospital, where the rest are being treated.

Union Petroleum Minister Dharmendra Pradhan has ordered a probe into the fire.

Mr Pradhan said he has directed the secretary to the petroleum and natural gas department to discuss with senior officials of the state government and IOCL about the fire and submit a report at the earliest.

I have directed the Petroleum and Natural Gas Secretary to conduct a probe into the fire incident that took place near Raj Bhavan in Bhubaneswar, the Minister said in a Twitter post.

He wished quick recovery for those injured in the mishap.

Chief Minister Naveen Patnaik said the state government will bear the cost of treatment of the injured and wished them speedy recovery.