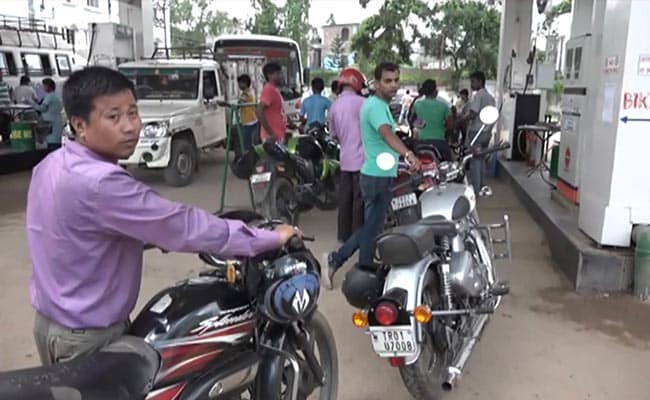 Agartala: Taking a cue from the Delhi government, Tripura has decided to introduce the "odd-even" system from Thursday in a bid to ration petrol and diesel due to extreme shortages.

"The odd-even vehicle registration number system will be introduced to distribute petrol and diesel to all vehicles including two-wheelers," Tripura Food and Civil Supplies Minister Bhanulal Saha said.

The Delhi government twice introduced an "odd-even" system -- under which vehicles with odd and even registration numbers would ply only on odd and even dates respectively -- in a bid to battle pollution.

Saha said the new system was being introduced to deal with the crisis of petrol and diesel and to check blackmarketing in petroleum products.

People were also facing severe scarcity of cooking gas due to a major shortfall in the supply of LPG (Liquefied Petroleum Gas) from Assam due to problems caused by the damaged National Highway-8.

Due to heavy rains and poor maintenance, the NH-8 has turned into a muddy field at Lowerpoah in southern Assam adjoining northern Tripura.

This has almost cut off Tripura by surface communication from the rest of the country for the past two months.

The NH-8 (previously NH 44) connects Tripura with the rest of India through Assam and Meghalaya. Another national highway, NH 208 (A), was developed last year and that too passes through Assam, taking a longer route to link Tripura. Its condition is no better than NH 8.

Tripura and other northeastern states are heavily dependent on highways for the supply of essential goods, foodgrain and fuels from other parts of India.

Saha said the Indian Oil Corp (IOCL) had taken steps to carry fuel to Tripura via Bangladesh. The minister said the Food Corp of India (FCI) had also initiated steps to transport rice via Bangladesh.

"After some repairing of the damaged NH-8, some trucks and fuel tankers passed through the damaged area but this was nothing compared to the massive problem," the minister said.

He said: "If the central and Assam governments had taken steps earlier to repair the Assam portion of the NH-8, then Tripura would not have suffered like this.

"The Centre should be much more responsible for easing the sufferings of the northeastern states which are affected due to lack of proper surface connectivity."

The disruption of rail and road traffic has shot up prices of essential commodities in Tripura.

According to the Tripura food and civil supplies department, the northeastern state requires 200 kilolitre petrol daily. On Tuesday all the 60 petrol pumps across the state were running dry.

The official said the state required 83,000 gas cylinders per day while the current average supply was much less.

Massive Fire At Delhi Cycle Market, No Casualties So Far