China has been blocking India's entry into the NSG which regulates the global nuclear commerce and insisting that only countries which have signed the Non-Proliferation Treaty be allowed to become members. 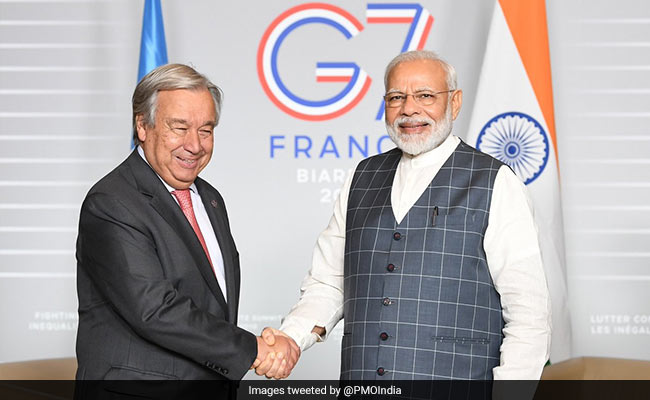 India is moving towards clean energy including investment-intensive nuclear power for which membership of Nuclear Suppliers Group (NSG) is crucial to building investor confidence, Prime Minister Narendra Modi on Sunday told the UN Secretary-General Antonio Guterres during their meeting on the sidelines of the G7 summit.

He said that the Prime Minister will be going to the United Nations General Assembly (UNGA) next month and participating as one of the keynote leaders and speakers in the UN Secretary General's climate summit and India hopes to launch a new initiative of the coalition for disaster-resistant infrastructure.

Mr Gokhale said that Mr Guterres expressed concern over India's thermal power plants in the context of climate change and the Prime Minister explained to him that India was moving towards renewable and cleaner forms of energy.

"In this regard, the Prime Minister referred to nuclear power and said this is an investment-intensive industry, that therefore, the membership of Nuclear Suppliers Group is crucial to build investor confidence," he said.

Mr Gokhale said the UN Secretary-General stated that he "understood India's position in this regard" and that he was willing to help out in this matter.

China has been blocking India's entry into the NSG which regulates the global nuclear commerce and insisting that only countries which have signed the Non-Proliferation Treaty be allowed to become members.

"He also took some time to explain his new initiative which is a coalition for disaster-resistant infrastructure which we hope to launch during PM''s visit to New York next month. And one of the ideas he spoke of was whether or not the world could come together to create a pool of trained volunteers in a global movement that would help countries recover after a disaster," he said.

He said that among the initiatives was 150th birth anniversary of Mahatma Gandhi and UN Secretary-General will also at present at a special function.