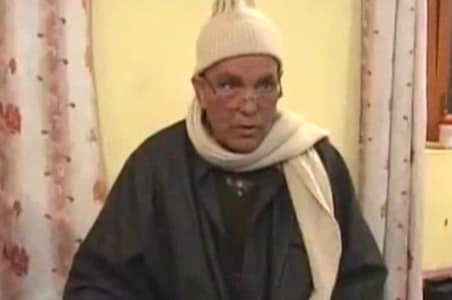 Srinagar: First, there was a storm over one of the country's highest honours, the Padma Bhsuhan, being given to Sant Singh Chatwal, the controversial hotelier.

Chatwal, a big donor to the Clintons' election campaigns, and a man about town in New York, faced five cases of financial fraud in India. Three of those cases were closed by the CBI, which was investigating Chatwal; a court acquitted him in the other two.

The BJP demanded that the award be withdrawn. Then there were others who questioned actors like Saif Ali Khan getting the Padma Shri. The public, the media and several eminent Indians who were left out of the Padma constellation, asked have the awards become irrelevant?

The latest controversy surrounds the Padma Shri given to a Kashmiri named Ghulam Mohammad Mir. Also known as Muma Kana,  Mir is a trained counter insurgent, and has been accused of murder and human rights violations.

Mir, however, says he's an Ikhwani -  in the valley, Ikhwanis are militants who have surrendered and now fight on behalf of security forces.

Mir claims he is a key information-gatherer and he claims to have helped  in the arrests of more than 5000 militants. He  says he has dozens of certificates from the security forces, acknowledging his contribution.

Promoted
Listen to the latest songs, only on JioSaavn.com
Ironic, given that Abdullah's father, Farooq Abdullah, was among the three people who recommended Mir for the award.   The others were Chief Information Commissioner Wajahat Habibullah and former Delhi BJP chief Dr Harsh Vardhan.

The Home Ministry says there's no record of him being a militant. But in Kashmir,  the opposition People's Democratic Party (PDP) says conferring the fourth- highest civilian honour on Mir  is a humiliation for the Kashmiri people.  "He is a person who is very much hated by the people in the state because he has allegations of having forced many innocent boys to pick up guns,"  says Mehbooba Mufti, leader of the PDP.