Nothing Objectionable If An MP Resigns, Switches Parties: Venkaiah Naidu

Mr Naidu made the observation after BJP member Neeraj Shekhar had requested him to look into the comments made by Jairam Ramesh. 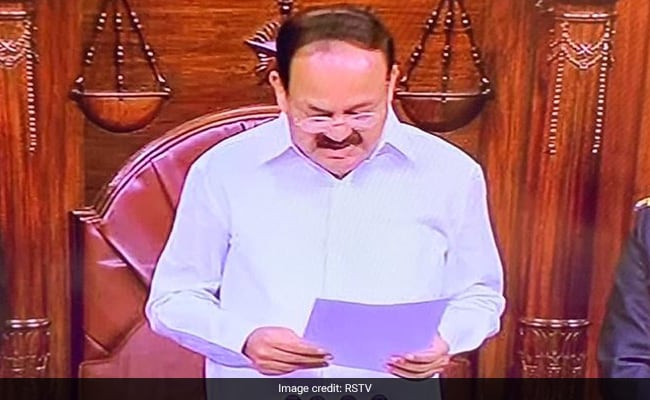 Rajya Sabha Chairman Venkaiah Naidu on Thursday said there is nothing "objectionable" in an MP resigning and switching over to other party as it is permitted in a democracy, days after Congress leader Jairam Ramesh talked about "enforced migration" in the Upper House.

Mr Naidu made the observation after BJP member Neeraj Shekhar had requested him to look into the comments made by Jairam Ramesh.

Mr Shekhar, who recently joined the BJP from Samajwadi Party, objected to the remark.

During a special debate on "The Role of Rajya Sabha in Indian Polity and The Way Forward'' in the House on Monday, Mr Ramesh had talked about "enforced migration" in the House. Though he did not name anyone.

"Let's not blame any individual as far as these issues are concerned. We must take it in a right spirit. Nothing objectionable if a member resigns. It is right royal way," Mr Naidu said.

The chairman said he had gone through the records of the other day and there was nothing "unparliamentary" about comments made by the Congress leader.

"It was a political comment made by him. I have come to know there is IMDT which means Illegal Migration Detection Tribunal Law. For legally resigning from their seat and getting elected from other party or state, there is no objection," Mr Naidu said, adding that it is allowed in a democracy.

Instead of resigning suspiciously, Mr Naidu said, one should do it in a royal way.

"If you don't like someone or not happy, you resign your seat and then get elected. That is the royal way. We have number of such examples."

Urging members not to blame anyone on this issue, Mr Naidu said 16 members had shifted from one party to the other before he became the chairman.